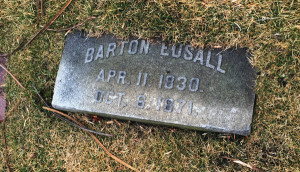 Hear the podcast version of the story above, or get it on iTunes!

Here’s a new story I came across while working on the MYSTERIOUS CHICAGO book; it quickly became a staple of my Graceland tours!

Near the famous “Inez” statue is the Hurlbut family plot, built for the founder of the Hulburt and Edsall drug supply shop, which was a landmark of the loop in 1860s Chicago. Among the small markers in the plot is one for Barton Edsall, the partner in the firm, whose date of death, Oct 6, 1871, will spark a bit of recognition for those who know their Chicago history. That was a busy week around here.

Early in the morning of Oct 6, Barton was found dying of a gunshot wound in the entryway of his house at Clark and Washington (now Clark and Delware, across from Bughouse Square). The front door was standing open, and a pistol was lying at Barton’s side. Why he’d gotten out of bed at all was unknown. By the time a doctor arrived, it was too late.

There were three possibilities – either he’d committed suicide, accidentally shot himself while messing around with a pistol, or a burglar had come and shot him. A coroner’s inquest dismissed the suicide theory, but there was convincing evidence for both other theories.  There’d been burglaries in the area lately, a maid had seen Barton shooting his pistol at a rat, and the results forensics that could have established whether the bullet came from Barton’s own gun or another one weren’t clear.

The inquest lasted for two days, and couldn’t come to a conclusion. From October 6th, when the story first spread, through October 8th, when the inquest was concluded and Barton was buried in his friend’s plot at Graceland, it was a major topic of debate around the city. Newspapers vowed that the story wouldn’t be forgotten, and that rewards would be offered for information about who might have broken into the Edsall home that night.

But hours after Barton Edsall was buried, on the evening of October 8, 1871, the Great Chicago Fire broke out, destroying a large swath of the city, including Barton’s home. Any chance at further investigation was destroyed, and Edsall’s story vanished from the news at once, though in weeks that followed a few out-of-town papers published a story that his wife, distraught with grief, was moved to an asylum just as the fire broke out, and the asylum burned in the fire, killing her. I couldn’t confirm that story, but couldn’t find anything to disprove it, either.

I’ll be covering the story in far more depth in the book – I ran across it quite by chance while tracking another fire mystery in copies of the Chicago Times from that week in the University of Chicago Special Collections. More on that mystery soon – it’s another real doozy!