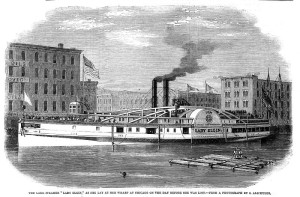 In 1860, the sidepaddle steamer Lady Elgin was wrecked about nine miles off Winnetka – another ship had collided with it, and the ship was busted up by breakers. Just under 400 people were on board, bound to Milwaukee from Chicago, allegedly after having seen Senator Douglas speaking in his campaign for the presidency (though the real reason was apparently raising funds to preserve an anti-slavery miltia; Douglas was not in town).

Another ship collided with Lady Elgin, and it was overturned and destroyed by breakers, resulting in the loss of around 75% of those on board.  At the time, it was the greatest tragedy that had ever befallen either Chicago or Milwaukee, and is said to have cost each city more lives than any single battle would in the coming Civil War.

The event is now recorded, but not really underlined, in Chicago history. Over time, it’s been overshadowed by disasters like the Great Fire and the wreck of the Eastland, or thought of as more of a Milwaukee disaster, since most of the passengers were from there.

But Chicago was the scene of many of the more gruesome aspects. Bodies were initially taken to City Hall for inquests, then moved to City Cemetery (now Lincoln Park). Contemporary newspaper articles make it look as though the bodies were set up in the “Dead House,” as they called the morgue in those days, but a 1908 reminiscence published in the Tribune described seeing close to ninety bodies lying on the ground in City Cemetery, waiting to be identified. It was certainly more than the dead house could have held.  Most of the bodies who were never identified in Chicago were eventually taken to the receiving vault at Rosehill, and about 27 were buried in a mass, apparently unmarked, grave.

Many of the bodies who came ashore closer to the site of the wreck wound up in a mass grave in Highwood, a small town in the north suburbs. And it was there that a ghost was seen throughout the late 1800s.

According to an 1899 Tribune article, the mass gravesite became neglected over time, and was marked only by two small wooden stakes at the turn of the 20th century (Indeed, the site was eventually lost to history altogether, until researchers at the Highwood Historical Society triangulated the location in just the last few years – see their newsletter (pdf link)).  That same 1899 article states that in the 1870s, when houses were being built in a mini “boom” in Highwood, there were stories of a ghost on the grounds – that of a beautiful woman in a black gown that was dripping with water. The ghost had a gold chain on her neck and diamond earrings in her ears, and was often seen waving her hands, as it to drive the builders away. She was particularly said to haunt the site of one particular construction site where the house was never completed. Some probably said that they stopped building the house because of the ghost.

The Tribune tracked down a man named Henry Mowers who said that he knew exactly who the ghost was – or, anyway, he knew which unidentified body it was.  “Yes, I was on the beach immediately after the wreck of the Lady Elgin,” he said. “For days afterward bodies continued to be washed up by the sea on the beach just below the lighthouse. I’ll tell you of one specific case which to me was at once the most pathetic and the most horrible of all. A woman clad in black silk and showing, despite the fact that she had been wave-tossed and beach-beaten for several days, that she had been a woman of beauty, was finally thrown up by a wave of sufficient strength to give her body lodgement on the sands below the bluff on which stands the old lighthouse. We found her there and carried her to a building some distance from the water.

“An examination showed that on the body was a handsome gold watch, a thing somewhat rarer than it is now, while about the neck was a fine gold chain. On the fingers were several rings, two of them containing large solitaire diamonds. The effects were left upon the body and the proper officials were notified…. the next morning, when the officials arrived, the door was opened, but there was neither ring, watch, nor necklace upon the body of the woman…. I saw the chain with its gold piece pendant hanging from the neck of the wife of a prominent Lake County official not six weeks afterwards. The man had entered the building in the the night and stolen the jewelry from that poor drowned woman. A nice sort of official was he not?  The stealing of the jewelry was undoubtedly the reason why the body was never identified. I made a coffin for her with my own hands, and made it rather better than I did the others…Yes, she lies up yonder unknown and forgotten by all save two or three of us. I suppose there is rubbish on her grave, and I know that cows are pastured there, but time makes living people careless of the dead.”

Over the 100th anniversary of the Eastland wreck, there were many astonished stories of how few people in Chicago today know about the disaster. But it’s certainly better known than the Lady Elgin, which seems to have been almost totally forgotten by 1899, even in the small town near which the wreck was eventually found in the 1980s. I haven’t looked into this extensively, but from a quick search I could find nothing about there being a grave site in Rosehill. As Mr. Mowers said, “Time makes living people careless of the dead.”