I suppose that on any website that deals with ghostlore, we have to deal with “orbs” from time to time. Orbs are little white or grey balls of light that often appear in photos, and some say that they’re ghosts. Most of the time, they turn out to be something else – dust, the result of a camera dealing with low light, light refraction, or such like. I seldom mention them on tours, though on many tours I’ve had people who’ve heard of them elsewhere getting excited to get photos of them. I don’t want to spoil their fun or anything, though I also don’t want people going around posting orb pictures and saying “Adam Selzer says these are ghosts.”

Here’s an example – one that backs up the pet theory I joke about sometimes: that orbs aren’t ghosts, they’re ghost farts: 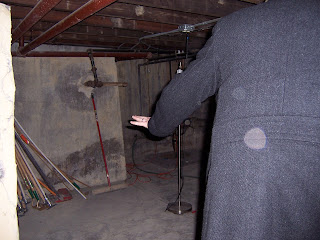 All that said, though, now and then we’ll go through periods where we get one particular one over and over. In that same basement above, we used to get a couple where the visual noise in the center kept looking like two specific faces (one looked like the former owner of the building, and the other looked like the guy on the Quaker Oats box). I remember that some years back we used to get one oversized one at the Eastland site that we called “Sherman.” (I’m sure we had a good reason for this, but damned if I remember what it was!) Both of those things went through a brief period of showing up often, then stopped showing up altogether.
In the last few months, we’ve had a lot of shots of a really, really big one in the courtyard next door to Hull House. We call it “Glinda,” because it looks like something the Good Witch of the North might float in on. Here’s one example, in a shot by Josh Finehan: 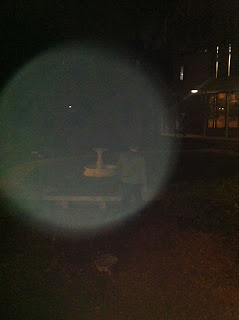 Now, I always assume that orbs can be explained away easier than most ghost photos (and there’s no such thing as a “million dollar photo” that will truly convince anyone who didn’t take it), but I’m amused by the Glinda orb. In seven years of taking tour groups there I can’t think of any other time when we were getting this specific shot over and over. Did something in the environment change? Is it a quirk of the cameras that are popular this year? Or COULD it be something else? Between the closing of the Hull House foundation and some of the political stuff going on this primary season, there have been few months in history when Jane Addams’ rest would have been more disturbed.