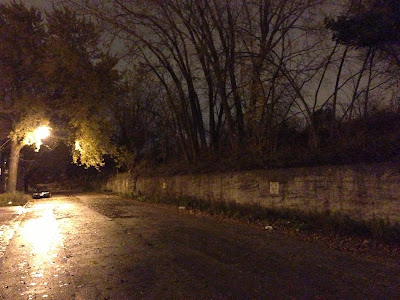 Once again, I’m a sucker for a good headless ghost. Many “haunted Chicago” type books mention a headless horseman who has been seen riding down the railroad tracks on 49th Street near Loomis. If I were a headless horseman, this is exactly where I’d want to hang out. LOOK at it in the shot on the right!

According to legend, the ghost is the spectre of a cavalryman killed July 7, 1894 during the bloody riots that resulted when Pullman workers went on strike to protest their boss being, shall we say, a bit of an ass who lowered their pay, but not the rent in the company town.

Things did indeed get rough on 49th Street that day. All over the stockyards area, railroad cars were overturned, and at 49th street rioters tried (unsuccessfully) to destroy passing trains. July 7 was probably the bloodiest day of the strike; a couple of men were killed, and many more were wounded, some of them fatally. The rioters did some damage of their own (Chief O’Neill thought it wasn’t nearly as bad as reports indicated), and members of the Illinois National Guard fired guns into the crowd, which some reports say numbered eight to ten thousand people.

However, though newspapers gave a detailed list of who had been killed or wounded and how, I haven’t found any mention of anyone getting decapitated.  There was one officer killed by a train at the end of the month – he appears to have tried to jump off the moving train while patrolling it near Damen. He was badly mangled and soon died, but apparently with his head still attached, and not while riding a horse.

Of course, that doesn’t necessarily mean that the ghost isn’t real – just that the backstory isn’t quite right. There were many other injuries, and it’s likely that some didn’t make the papers; in particular, reporters were only able to speculate about injuries among the strikers and rioters, since those who were hurt were generally afraid to seek medical attention, and several news reports indicate that many dead or dying rioters were being carried off by their friends. Certainly one can see how a legend of a man being decapitated during the riots would grow and thrive in the neighborhood.

And what if this ISN’T just the way that memories of the Pullman strike continued to survive in the neighborhood? Who’s to say that the ghost is necessarily from the strike, or that it has to have happened at Loomis? A headless horseman is, by nature, in motion, and could really be the ghost of any number of people. There was a terrible accident at 49th and Halstead a year before the strikes in which a train crashed into a street car; three people were killed, including an man (identified as a plumber named Finn) who was cut to bits. What his ghost would be doing on a horse is a whole ‘nother question – I would say that the number of people decapitated while riding horses is going to be awfully low in cities with no history of people firing cannons at each other.

Finn probably wasn’t the only one to lose his head on the Grand Trunk tracks, though – the tracks at the time were still grade-level, and fatal collisions at grade-level crossings were really, really common. When the tracks were raised up to their current place in 1891, it was noted that in the previous month there had been 18 fatalities at such crossings, including one at 49th and Ashland, right near 49th and Loomis.

i Thurs, Mar 26, 11am
Rosehill Cemetery (via airbnb experiences)