Resurrection Mary isn’t the only “vanishing hitcher” in the world; she’s not even the only one said to haunt Chicago. The south side has a vanishing girl who appears on CTA busses around Evergreen Park, for instance. 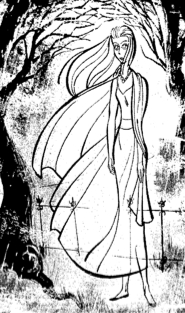 And Forest Park is home to vanishing “flapper” who was said to hitch hike from the Melody Mills ballroom to Jewish Waldheim cemetery, where she vanished. Some versions of the story say that she tells drivers that she lives at the caretaker’s house before disappearing at the gates.

Unlike Resurrection Mary, there aren’t many first-hand accounts of this, and there’s a bit of confusion as to whether the vanishing “Flapper” and the ghost who hitched rides from Melody Mill are even the same ghost. It seems to me that there are two different stories here that got conflated into one single one over the years.
The story of a hitcher at Melody Mill (a now defunct ballroom) have been circulating since at least 1938, and possibly earlier:  in 1984, Dave Hoekstra of the Melody Mill told the Sun Times about a story that had happened in the ballroom fifty years earlier in 1934: a young man named Wally met a blonde woman in a snow-white gown who asked for a ride home, and who then asked to be dropped off at Wood Lawn Cemetery. By then, though, they’d made a date. A week later, Wally went to her address, where the woman at the door said that the woman Wally described sounded like her daughter, but that she’d died three years before.  How much of this is an accurate description of Wally’s tale is tough to guess – Dave heard it second-hand from Ben Lecjar, Sr, the former owner, making it a third-hand account.
The story is, almost to the letter, a textbook retelling of the “Vanishing Hitchhiker” urban legend, featuring just about all of the major motifs except for finding a sweater on her grave the next day. One reason that the Resurrection Mary sightings are compelling is that, while details like going to her home the next day and meeting her in a ballroom are common in retellings of the story, they’re generally absent in first-hand accounts (there’s a bit of a distance between the story that you get from reading reported sightings and the version you usually hear when the story is retold). This Melody Mill story lines up neatly will all the motifs of vanishing hitcher legends that folklorists were identifying in scholarly articles a decade later. 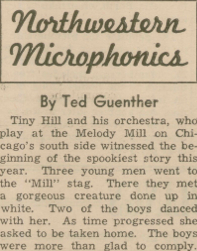 The Melody Mill story got a big boost in 1938 when Tiny Hill, the leader of a band playing there at the time, told the story of a vanishing hitcher live on a WGN radio show. Tiny’s story may have been inspired by the story of “Wally”and changed a bit for dramatic purposes, or it may be the actual source of the story, if Hoekstra was wrong about 1934 being the date when the story began.

According to the radio show, three young men met a woman in white at the ballroom. She asked them for a ride home, then got out of the car at an unnamed cemetery and ran inside. Two of the young men followed her. The next day, the police found two “raving maniacs” in the cemetery, and the third man was dead at the wheel of his parked car. Investigators went to an address they found in a purse that was left in the car, and the woman at the door told them that it was her daughter’s purse, but that she had died three years before.

The Daily Northwestern wrote that “It was a good publicity stunt – and how!”
So we can see that the story of a vanishing hitcher was common at Melody Mill in the 1930s, though it’s hard to be sure it wasn’t invented outright by Tiny Hill.  Whether anyone ever really thought it was a true story in the 1930s is probably an open question. Had “Wally” really been to her home, they would know the ghost’s name, but this doesn’t seem to have been a part of the story.
While most Chicago ghostlore studies have assumed that the vanishing flapper who is said to disappear near Waldheim and the Melody Mill hitcher were one and the same, it seems to me that we’re dealing with two different stories that simply got conflated over the years. The sightings of the ghost at Waldheim have generally concerned a young, dark haired Jewish woman in a flapper outfit. The Melody Mill hicher is said, both in reports of sightings and the fictionalized version, to be a blonde in white. Which cemetery Tiny Hill mentioned (if he mentioned one) is not recorded, but people from Melody Mill actually specified Wood Lawn.

So it seems that we’re really dealing with two different stories here. There are records for several young women who died around the 1920s at Waldheim, but unlike Resurrection Mary, no theory for who she’s the ghost of have emerged. Frankly, no good theory for Mary exists, either – I never found a reliable account where “Mary” actually gives her name, or any hint of how she died. There are 60+ young women named Mary who were buried at Resurrection around the right era, and we’ve identified plenty who died in car wrecks, but stories of her being the ghost of a girl who died coming home from a dance are really pure specuation; there’s almost nothing in first-hand accounts to suggest that she died this way. From what we can actually tell, she could just as easily be one of the many, many girls in the cemetery who died of pneumonia or tuberculosis.

There’s a whole LOT more data analysis on Mary sightings in the new book below:

2 thoughts on “The Hitchhiking Flapper Ghost of Waldheim Cemetery”