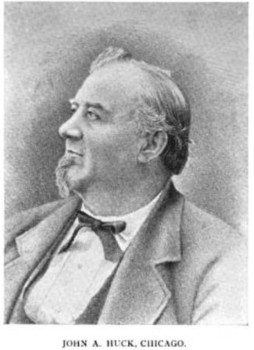 When John Lennon apologized for his infamous “Bigger than Jesus” remark at the Astor Tower Hotel, it’s quite likely that he was sitting several floors atop a network of lost pre-Fire tunnels.

It’s hard to get rid of a tunnel. You can fill it with damp sand, like the LaSalle Tunnel under the river, or block it off, like the one connecting the Congress Hotel to the Auditorium Theater, but unless you tear it all away to make room for a new basement or something, the tunnel will still be there. In most cases, workers know where the tunnels are. But the John A. Huck Brewery Tunnels of the Gold Coast remain a mystery.

For some background, John A. Huck was a Chicago brewer; I first became aware of him by running into his nifty tombstone at Graceland, which features a bas relief portrait of him. Every time I need a neat one with a name I don’t recognize, I look the name up. It’s amazing how often they turn out to be brewers.

In the 1840s, Huck opened the first lager brewery in Chicago at Chicago and Rush, back when the area was still practically the wilderness. In the 1850s he moved to a new location at Banks and Astor, just south of the Catholic portion of City Cemetery (now Lincoln Park), which started at Schiller. The area seems to have been bounded by State and Astor at the West and East, and from Banks to Goethe from the North to South – a full square block, across the corner from the future Playboy mansion, though one source says that it went clear north to Schiller. In what was then quite an innovation, the brewery featured a whole network of subterranean tunnels and vaults for brewing the beer at low temperatures year round – a 1901 book about brewing history says there were two full miles of them in total.

The brewery was destroyed in the Great Chicago Fire in 1871, but the tunnels remained.

They first seem to have made the news in again in 1910 when vandals broke into the mansion of Charles Plamondon, 1344 N. State, and spent a day stealing and destroying things, having what seemed to be a hell of a food fight, destroying priceless art and furniture, and generally trashing the place. Though a burglarly on a grand scale, the food fight led police to belief that it was simply the work of neighborhood boys, who then abandoned much of the loot in the old brewery vaults nearby.

“Three deep caverns at this corner (Banks and Astor),” wrote the Tribune, “have been known for years among the boys in the neighborhood as the ‘robbers’ dens.’ They were formerly the underground vaults of a brewery and are covered with the exception of three entrances facing Astor Street.”

The robbers went through all of Miss Marie Plamendon’s wardrobe, breaking one of her

old dolls, throwing letters and ribbons and photos everywhere. More than half a century later, Miss Plamendon, now in her 80s, was reached by the Tribune when they first heard the story of the tunnels in 1963.

“Certainly I remember the tunnels!” she said. “When we were kids we played in them all the time, and believe me, we got many a scolding and spanking for going into them. We thought they were our discovery, and tried to keep them a secret from the adults, but it didn’t work. There were tunnels underneath a lot of the property on Banks Street, near Astor…. I remember once when our house was burglarized while we were in the country, we found all kinds of stolen things – ribbons, odds and ends – down in the tunnels. We always wondered if the robbers were lurking down there.”

The Tribune had contacted Miss Plamendon while following up on a letter sent to them by Gilbert Amberg, who thought of them when the Ambassador prepared to teardown some brownstones nearby.  “The entire half block on State between what is not Goethe and Banks was the site of a brewery,” he wrote. “The area was honeycombed with tunnels that were used as storage areas for aging the brew. Some of them were dug up for the Ambassador East hotel foundations in 1927, but you’re going to see a lot more of them when the old brownstones come down.”

Reached by phone for a follow-up, Amberg laughed and said “I was pretty young then, and I don’t know if I can trust my memory on this, (But) I do remember walking through the tunnels; they were probably well over six feet high. My guess is that they were made of either brick or stone. There were two connected tunnels that ran under our yard, and they had high arched roofs. I suppose they were perhaps 30 feet underground, because we only discovered them after the lot had been excavated…it’s quite possible that the tunnels weren’t discovered when the brownstones were built, because the foundations for those homes only went down about six feet below the basements.”

Amberg’s brother John, a minister, added to his account: “There was a solid brick wall along our property line, and when the excavation for the hotel had been made, the construction workers found a doorway in the wall about four feet under the surface of the yard. This was the entrance to the tunnels, which sloped down under our yard and ran for some distance. They were caved in a little to the north. It explained something that had always puzzled us. There was a vacant lot next to our house where we children used to dig. We could never get very deep without hitting a solid stone-like surface. We must have been hitting the roofs of the tunnels, of course.”

The Tribune also tracked down Walter Fisher, who remembered playing in the tunnels around 1900 (but probably declined to ask if he was one of the burglars). “We boys used to make candle lanterns out of tin cracker boxes; in those days crackers came in shiny tin boxes that made wonderful toys. We would explore the tunnels, which we were strictly forbidden to do, because our parents suspected that tramps slept there…they were perhaps 10 or 15 feet deep, and filled with rubble, but they were wide enough for several boys to walk abreast. They were made of brick, I think, and the roofs were arched; they were more like vaults than tunnels.”

Jospeh Cremin had lived on State as well, and noted that when they “had the devil’s own time” trying to lay foundations for the hotel because of the tunnels, it cleared up an old puzzle for him. “For years, we had tried to freeze our back yard for skating, but the water would soak right into the ground and disappear. We even had the fire chief out to inspect the yard, and damned if he knew what was wrong, either. We found out later that the water had been draining into the tunnels.”

In a particularly enterprising bit of reporting, the Tribune even tracked down Joseph Beuttas, president of the construction company that had built the Ambassador East decades before, who was away on a Norwegian cruise. “I saw (the tunnels),” he said. “I walked in them. They were about 8 to 10 feet high, built of stone, and were about 20 feet below ground. They extended to the east and to the south. We destroyed the ones where we were building, (but) no doubt more tunnels will be found when they start excavating for the addition to the Ambassador East.

Now, newer construction has probably resulted in basements now occupying some of the space where the tunnels used to be, and it’s worth noting that the memories of just how deep they went seem a bit fuzzy and conflicting. But James Jardine, water commissioner as of 1963, told the Tribune that it was hard to tell – since they were private property, there might not have been a record of their construction to start with (not to mention the loss of records in the Fire). “Of course,” he said, “when the public utilities were installed, the engineers might have run into these tunnels, and undoubtedly they would have made a note in their log books. But the log books aren’t part of the public record, and they’re probably buried deep in some warehouse.”

Given the sheer scope that the tunnels seem to have covered, it’s unlikely that all of them have been destroyed. There may be no way to access them without some heavy-duty equipment by now. With such patchy records, it’s impossible to know how far the tunnels went, where exactly they’d be, or anything else. But with such an extensive network, it’s to be assumed that some are still around. I keep hoping some kid playing Pokemon Go will find something completely unexpected….

1 thought on “The Huck Tunnels of the Gold Coast: Can You Find Them?”