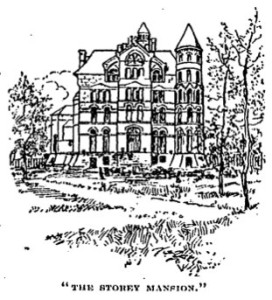 It’s always fun to read old newspaper articles with hindsight and see who really had a grasp on where the world was heading and who was out of his mind. Falling firmly into the latter category was Wilbur F. Storey, editor of the Copperhead (anti-Lincoln/Union) journal, The Chicago Times. His paper was practically a celebration of racism at times. Among his more notable “accomplishments:”

– He once described the president’s latest speech as “flat, silly, dishwatery utterances” that should make “the cheek of every American tingle with shame.” That speech was the Gettysburg address.

– He may have invented the story that Mrs. O’Leary was responsible for the Chicago fire (one of several journalists sometimes credited with making it up; he wasn’t wild about the Irish).

– After his paper was shut down by the Union Army (and re-opened at Lincoln’s own order), he posted a ghastly parody of “The Battle Cry of Freedom” that championed fighting for “white rights.”

And that’s barely a start. I sometimes think I should start a whole twitter feed of “S%^t The Chicago Times Said,” but most of it would just be stunningly racist (even by 1860s standards) BS that should probably just be left to rot in the microfilm room.

As he grew older and lost what grip on sanity he’d had in the first place, Storey began hearing voices in his head.
In particular, he claimed to be speaking with an Indian maiden who was called “Little Squaw” and called him “White Chief.” At Little Squaw’s direction, he began to build a sparkling marble palace for himself on 43rd and Vincennes (ironically, in what would later become Bronzeville). To his face, people called it The Storey Castle. Behind his back, it was known as Storey’s Folly.

The cost of the materials alone for this “wigwam” was estimated in the $200,000 range, and the cost of rebuilding it as the spirits directed him doubled the price. Far gone from his senses (but still running the paper), he would go inside the unfinished building, and freak out over the “snakes” coming up through the floors (pipes, most likely) and order everything redone. According to legend, on one of his more lucid days he walked past the giant marble palace and said “What damn fool is putting that thing up?”

The drawing at the top is the only image I’ve found so far, but mid-20th century articles show that lived on in the imaginations of people who saw it. It was sort of legendary around Chicago for quite a while. However, no photograph is known to survive.

At his death, the massive structure was still unfinished, and it sat empty until around 1892, when his heirs finally gave up on trying to sell it. It was torn down, and 400 tons of iron beams and girders were sold off. There remained about a million and a half bricks, and a whole heck of a lot of marble. Much to if was used to build new houses around 43rd, Vincennes and Vernon – builders estimated that at least 50 good-sized houses could be built from the rubble.

Some of these houses may still be standing. Anybody know?