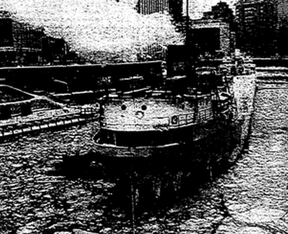 In the 1970s, the largest ship on the great lakes was the Medusa Challenger, a vessel more than five hundred feet long that was used to transport cement. Pre-dating the Titanic by about three years, the ancient ship was known as a “jinx” ship – during the 1960s and 70s, the Tribune reported at least 20 instances when it drawbridges failed when the Medusa went by.  Stories also go around that its low-lying hull occasionally churned up a body or two. The “curse” ended when it started entering from the south side instead of going through the loop.

The ship is still in operation in the lakes today, and currently known as the SS St. Mary’s Challenger. Though the “jinx” stories seem to have died down now, there was a death reported onboard fairly recently. I’m a bit stunned to hear that a boat older that Titanic (built in 1906) is still in operation!

2 thoughts on “The Medusa Challenger”