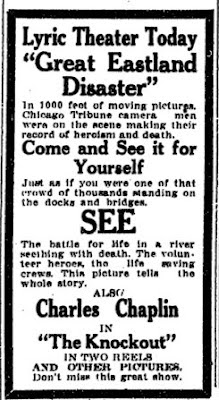 In 1915, when the Eastland capsized in the Chicago river, one enterprising camera man ran to a fire escape on the Reid Murdoch building, just across the river from the disaster, and began to film. Eventually he got footage not just of the boat on its side, with firemen racing across it, stretchers (with the bodies covered) being carried around, and divers plying their trade. There were also, according to contemporary accounts of the film, shots of workers rushing about in the Reid Murdoch itself (which became a hospital/morgue) and in the Second Regiment Armory. A few girls who survived voluntarily posed for the camera.

The film was about a thousand feet long, and was being exhibited around the country only days after the disaster. Around forty prints were known to exist at the time. The city censors (we had film censors then) refused to let it be shown in the city limits; a note about the rejection indicates that it was made (or distributed)
by the Selig Polyscope company; various papers credit the filming to the Chicago Tribune company of the Universal Current Events company. It could be that Selig simply made a hasty film of his own re-enacting things.   The ad at the right is from The Flint Daily Journal on July 31, a week after the disaster. What an odd double feature – The Clark Theatre couldn’t have come up with a stranger pairing.

So far as I can tell, there are no surviving prints, and information about it is hard to come across. Does anyone know more about    this? Practically all films from that era are now lost.

One thought on “The Missing EASTLAND movie?”