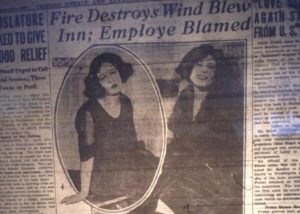 Now that we’ve cleared up the mystery of Lillian Collier: The Vanishing Flapper, we’re left with another mystery: what was the deal with Virginia Harrison, her “aid?”

When the Wind Blew Inn, a bohemian tea room, was raided on February 13, 1922, the police arrested 40 patrons, as well as Lillian Collier, the owner, and Virginia Harrison, who was variously described in the press as Lillian’s aid, assistant, partner, employee, or sister (some modern commentators have assumed that “aid” was code for “girlfriend.”). They were both listed as living in the same building as the tea room, though by April Lillian’s address was given as 545 N. Michigan, around the corner from the place. Between Feb 13 and April 21, the place was raided several times, and Lillian (who claimed to be friends with Mayor Thompson) successfully received a writ banning the cops from interfering with her.

Lillian took to complaining that “cops are here oftener than customers.” “They simply come in droves;” she told the Journal. “And it is hard to distinguish between them and guests, except that the cops….never take off their hats. My! I nearly insulted a customer a while ago. An absent-minded old gentleman sat down without removing his hat. I told him, ‘if you cops’re going to hang around here you’ll have to eat and be merry and take off your hats!’ My, but he was indignant! ‘Madam,’ he said – and I just hate to be called ‘madam’ – “madam, you confuse me.’ Of course, I apologized and told him my latest joke.” She told a judge that she ran a strictly decent place, and that she believed it was the finest restaurant ever built into an old gasoline station (Though later patrons admitted that the 75 cent cups of “tea” were not really tea).

Cops certainly did make trouble, and teased her in court, saying that they used only candle-light because it “saved on dishwashing costs.” A few cops were said to be laughing when the place burned down in April, 1922 (Lillian opened a new, slicker version right next to the police station on LaSalle to save them the trip, but it wasn’t a success – it was too “nice” for the bohemian crowd).

One paper said it was Virginia Harrison who told the judge “There is no snugglepupping at the Wind Blew Inn,” the most famous line from the whole affair. She was often photographed alongside Lillian, and was her co-defendant at the bizarre trial in March, 1922, when the two of them were sentenced to read a book of fairy tales to cure their bohemianism.

A few weeks later, The Wind Blew Inn burned down. The Tribune said that Lillian blamed puritan arsonists.  In other papers, though, she seemed to be putting the blame on none other than Virginia Harrison!

It seems that in the weeks that followed their strange sentencing, the two of them had a falling out of some sort. By April 21, the night of the fire, Virginia was described as a disgruntled former employee who had been heard making threats, and who may have even been seen around the place with a can of gasoline. Lillian herself was brought in for questioning, but when it turned out she had no insurance on the place, she was absolved of all blame, and police began to focus on looking for Virginia Harrison.

Here her story seems to end. I’m not sure whether they ever found her or what. One paper said that she was also known as Jean Lawrence (whether that or Virginia Harrison was her real name is hard to guess). Either name is common enough that she’s pretty hard to trace.

So what became of her? Was she Lillian’s girlfriend (or trying to be?) I can imagine a scenario in which she was in love with Lillian, but Lillian wasn’t actually into girls, and Virginia torched the place after being rejected… but that’s usually the sort of story that happens in bad TV dramas that risk get boycotted by GLBT groups!   Her antics and quotes certainly didn’t attract as much media attention as Lillian’s own did – papers rarely quoted her directly or spoke about her adventures in flagpole sitting, etc.  Other than possibly being the source of the “snugglepupping” line (which other papers credited to Lillian), it’s Lillian who gets all the best quotes in the articles, and who was later remembered in many reminisces of Chicago bohemia. 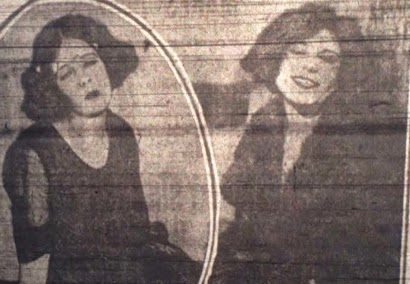 Above: Virginia, right, with a rather unflattering shot of Lillian! This is from a
Chicago Journal article noting that Virginia was wanted for questioning.

Tomorrow, we’ll examine the case of Mildred Bolton, a forgotten murderer that Lillian wrote about in the 1940s under her pen name, Nellise Child!