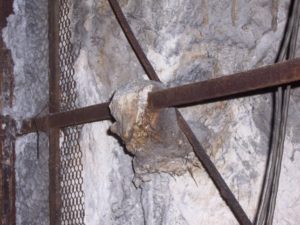 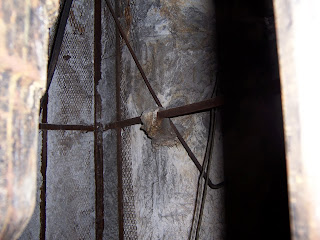 Welp,  I guess I have to fess up to this one. Apparently this story has gotten all out of control!

In 2006, I participated in a ghost hunt at the Congress Hotel, the first of several I’d be involved with over the next few years. Like most of them, we did more exploring than anything else. There’s a lot of exploring to do in that place – there are nooks and crannies and service hallways and unused rooms and space everywhere.

Behind the balcony of the Gold Ballroom, in one of several holes in the drywall, there was something that looked like a hand coming out of the all and gripping a crossbar. It was too far back to reach, but we all made some jokes about it being a hand. It was only when I blew up the pictures later that I saw that it really did appear to have fingers, a thumb, and everything:

It became a sort of a running joke. At first we called it “the Devil’s Hand.” Occasionally I’d show the picture of on tours and tell the story that it was “the Hand of Drywall Dave.” Often the story would go just like this: after showing the picture, I’d say “There’s certainly no evidence backing up any rumor that a worker was walled up inside the place, and it’s probably just a glove that got plastered over by some contractor with a weird sense of humor, but this could be The Hand of Drywall Dave, reaching out towards freedom!”  Willy, my old driver, always wanted to throw in a gag about Jimmy Hoffa, too. I never suggested that it was real, and always assumed that everyone knew it was just a gag.

But over time, I noticed it turning up on a handful of webpages. And last night, when I went to the Congress to film a segment for an upcoming Travel Channel show, the crew was all excited about the story that some guy was buried in the walls. Apparently it’s being taken as fact on a LOT of webpages. I made the story up fairy early in my career, when I was more casual about throwing out gag stories to fill time when we got stuck in traffic; I’ve since learned a valuable lesson that no story is so ridiculous that it won’t be taken as fact. Even the story I tell when we get stuck in traffic by a McDonald’s about a guy being haunted by the Hamburglar is probably going to turn up on TV sooner or later.

Last night, though, I did get to take the crew to see the “hand” – it’s still there. For a while it was thought to be a glove that got plastered over by some contractor with a weird sense of humor, but it’s deteriorated enough that it’s clearly not a glove. More likely, it’s just some caulk that happens to look like a hand. For the record, the wall it’s coming out of isn’t nearly thick enough for anyone to be buried in it.

I was actually able to touch it with a pipe that happened to be around there last night (there’s a lot of stuff lying around in those service hallways), and probably could have busted the thing, but I decided not to. The whole place would probably collapse if I did; it’d be just my luck to have it be a load-bearing mystery hand.

So, is Drywall Dave holding the place up single-handedly? It’s as good an explanation as any other for how the place has stayed in business!

I suppose the lesson here is that you can’t believe everything you read on webpages about ghosts and hauntings. The Congress, in particular, is one of those places where any “real” stories are getting buried by nonsense about Al Capone owning the place, a room being so haunted that it was sealed shut, etc. There have been plenty of gruesome deaths and reports of hauntings in there that can be traced and confirmed – there’s no need to make anything up.

Unless it’s just for the sake of a joke.

Note: now that I look, i see there are a LOT of webpages about ghosts in this place that read like my stories about the place after about five rounds in a game of “telephone.”  Purple monkey dishwasher. More on the congress: