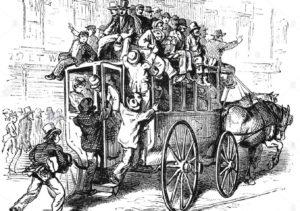 In July of 1862, as the Civil War raged in the south, a tangential battle was waged in Chicago on the corner of Clark and Randolph.

The horse-drawn omnibusses in the city were privately owned, and generally not segregated, though there seems to have been an unwritten rule that black passengers would move to the outside seats if a lady on the inside requested it.  This doesn’t seem to have happened often, and probably didn’t happen on July 14, when Richard Kelley, a driver for the M.O. Walker and Co omnibus company, asked M.E. Walker, a black man, to get off the bus altogether.

Kelley was new to the company, and apparently assumed that he was working for a white only concern. Passengers had loaded up the bus while it sat on Clark, and when Kelly came to take the reins, he ordered W.E. Walker to get out, in an unprovoked tirade that by all accounts included several uses of racial slurs and swear words.

“I have ridden in these busses for years and always paid my fare,” said Walker. “I  was never ordered out of one before.”

In further arguments, Walker continued to refuse to give up his seat, until Kelley entered the bus, grabbed Walker by the collar, and dragged him out, punching him in the face along the way. Walker managed to pink Kelley to the ground while he called for help.

By all accounts, a crowd gathered quickly, and eventually several arrests were made. The sheriff broke up the fight and Kelly drove off. The sheriff, with an alderman in tow, rushed Walker down the street in attempt to accompany him onto the bus personally, but Kelly eluded them to the end of the line. Kelly was arrested for assault when he eventually got off his bus.
In the days that followed, the “omnibus riot” was briefly national news, and the various papers behaved much as papers do today. Conservative papers such as the Chicago Times insisted that Walker had been smoking and swearing on the bus, more progressive ones like the Tribune insisted that he hadn’t been (witnesses agreed that he had not).

Papers (and, later, lawyers) also disagreed over whether it was the “secessionists” or “abolitionists” who were threatening a full-on riot. The Tribune called the treatment of Walker “one of the grossest outrages ever perpetrated in the city,”  and said that “it is attributed to the teachings of such papers as the secession Chicago Times..emboldened by our reverses at Richmond, to create mob for the purpose of a riot against the colored citizens…. during this afternoon, several colored men were assaulted, and it was hardly safe for them to appear upon the street at all.”

True to form, the copperhead, ever-racist Times acted as though Kelly was some kind of hero, and the sheriff trying to help Walker get onto a bus made him an abolitionist maniac.   The Times wrote that the sheriff had planned to  illustrate “to the people the Chicago doctrine of negro equality, now so much in vogue (but) the whole thing was an ignominious failure. The next best thing was the arrest of poor Kelly.”

The Chicago Journal tried to play the old “both sides are being too hasty” card, though their frequent use of racial slurs (really, they used every one of them in the book) shows pretty clearly which side they were on (They wrote that the whole thing would be cleared up if the bus company simply made a “no negroes” rule).

Kelly was brought to court on an assault and battery charge, but the jury couldn’t reach a verdict (they disagreed over what his fine should have been), and the case was still pending when he rejoined the Union army (only to resign in protest over the Emancipation Proclamation a few months later). The are military records in the “Subversion Papers” of Kelly trying to defraud the U.S. government in a bounty-stealing scheme.

The Omnibus Riot is one of those events that was “recorded, but not underlined” in Chicago history. It gets mentioned in a book or two, though it’s never been covered in as much detail as it should be, so far as I can tell; there are enough witness statements from the trial published that someone could write up a pretty detailed account. I could have sworn I wrote something up on it last year, when I gathered all the accounts from the Tribune, Times and Journal, but I can’t seem to find it now, so I’m putting up this short article as a placeholder until there can be a longer one.