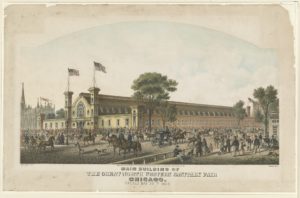 With posters from the 1933 Century of Progress in every gift shop and a seemingly endless series of books and exhibits on the 1893 World’s Columbian Exposition, it’s easy to forget that we’ve had OTHER great fairs around here, too. In the new episode of my Cemetery Mixtape podcast, I cover some events surrounding one that should be a lot more famous than it is: The Great Northwestern Sanitary Fair of 1865.

The fair was intended simply as a fundraiser for wounded soldiers, and one of the planned attractions would have caused particular notice: Abraham Lincoln himself. In February of 1865, a delegation representing the fair visited Lincoln at the White House and asked if he would come to give the opening speech; he told them that meeting so many people was always wearisome to him, but if he could get away from the office to make the trip – and he thought he might – he would. It would have been his first visit to Illinois since leaving for his inauguration four years earlier.

Of course, by the time the fair opened that Summer, the world had changed. Lincoln had been assassinated, and the war was effectively over. The fair, then, became sort of a victory lap for the Civil War. Thomas Bryan (the founder of Graceland Cemetery, later VP of the Columbian Exposition and a major HH Holmes swindling victim) introduced such speakers as General Grant, General Sherman, and General Hooker. Included among the exhibits were an old slave auction block (and several other gruesome relics of the now-extinct institution), Grant’s horse (which was raffled off), John Brown’s carbine, the bell from Jeff Davis’s plantation, Lincoln and Douglas’s outfits from the Lincoln-Douglas debates of 1858, relics of Libby prison, the catafalque on which Lincoln’s coffin had rested barely two months before, and a wax figure of Jefferson Davis dressed in the dress he was said to have been captured in (though it was really one of the dresses taken from a trunk he’d been captured with; Elizabeth Keckley, the Lincolns’ dressmaker, identified it as one she’d made).

The fair was held over the course of several days (not several months, as the larger fairs were), and scattered between several buildings, including Bryan Hall and a “main building,” pictured above, which was on Michigan Avenue and Randolph Street, around the current site of the Cultural Center.