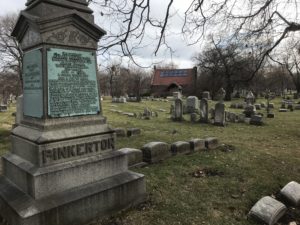 Today, I’ve launched a new podcast, Cemetery Mixtape, which will feature cool stories about interesting graves, with original songs by musical guests. Check it out! It’s been a lot of fun doing research on stories that take me outside of Chicago a bit; upcoming episodes revolve around graves in places like Nashville, Washington DC, and New York.

But I just had to have an episode about Joseph Wicher, who is in the section of Graceland Cemetery put aside for employees of Pinkerton’s National Detective Agency. Wicher, in a story I can’t believe isn’t better known, was murdered by the Jesse James gang in 1874.  (Much of the info here is also on the episode’s page at cemeterymixtape.com)

Allan Pinkerton was an abolitionist who started the first national detective agency – the first real private eyes. Nearby his own family plot, the Pinkerton Employee section essentially functioned as advertising for the detective agency (in addition to being a nice gesture for his employees). The trouble, from a tour guide’s perspective, is that the majority of the graves are too worn to be read: 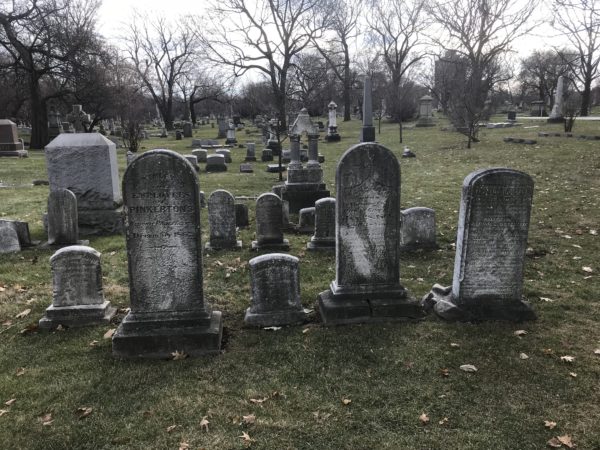 Among the two more legible graves at the front is Kate Warn (alias Angie Warren, according to cemetery paperwork), who has become very popular lately. A few books have been written about her in just the last few years, though most are novels just imagining the kind of work she might do, as we don’t really know much of what she did. . Pinkerton used her as a character in a couple of novels he wrote that were said to be true stories, though enough names and dates are clearly changed that they can’t really be fact-checked; when I tried to verify stuff about a story Pinkerton wrote of her impersonating a fortune teller, nothing held up. They do give us some idea of what sort of work Kate probably did, though, and we do know for sure that she assumed the role of a sick man’s brother to help Lincoln sneak past assassins and into Washington D.C. in 1861.

Another female detective, Kate Bracket, is also in the plot in an unmarked grave, but I think even less is known for sure of her; most of what I’ve seen written about her and Kate Warn basically amounts to fanfic, as most of the records of their Chicago work was lost in the Great Fire.    (If you want to look up a better documented early Chicago woman detective, check out our posts on Mary E. Holland).

The only other really legible stone is for Timothy Webster, whose monument calls him “The Harvey Birch of the Rebellion” (a reference to James Fenimore Cooper’s The Spy). Webster also helped with sneaking Lincoln into DC, then was eventually hanged by confederate soldiers who caught him spying behind enemy lines. He’s not buried in the plot, though, and never was! He was initially buried in Virginia, then moved to his family plot in a small town. The marker is just a monument.

Among the largely illegible graves around them, only Wicher seems to be well-documented; in 1874 he was sent to Liberty, MO, to look into the activities of the James gang. The sheriff there might have tipped the gang off, and they might have simply been able to tell he wasn’t a farmhand looking for work, as he claimed when he went to the James family farm – there’s no way to tell for sure at this point. Not long after he left for the farm, his murdered body was found by a farm, shot three times, and, in some versions (though I’m not sure any are reliable), with a note attached to his clothes reading something like “Let all detectives beware of Jesse James.”

Of the others, I could only find a tiny bit about Botella Olson, whom a newspaper once described as a “Norwegian spy.” Many of the stones look as though they may have once contained epitaphs with more data, like the larger stones for Warn and Webster, but the combination of age, limestone, and acid rain has made them impossible to read.

However, I do have this map that I made for Cemetery Mixtape: 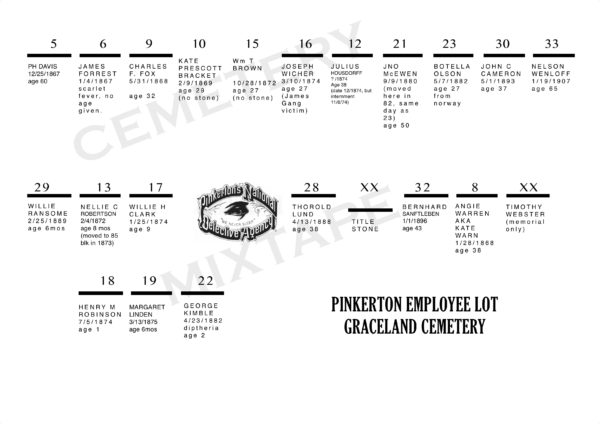 We’re still working on this, of course. In the meantime, hear more about Joseph on the new podcast, and come along on a Graceland tour some time!