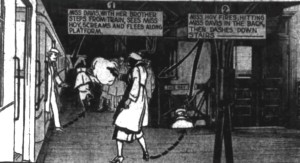 Newspaper writers of the early 20th century found lots of amusing euphemisms for LGBT couples – enough that one sees references to a young woman and her “aide” and it’s tempting, at least, to wonder if they were more than friends. Jeanette Hoy and Katherine Davis don’t seem to have been a couple, exactly (to Hoy’s chagrin), but papers referred to their “odd friendship” and used the word “chum” in scare quotes after Hoy shot Davis, then herself, in 1921.

Davis told reporters that she met then-20 year old Hoy in 1919, when she was living in an apartment of her own in the Eleanor Club (a chain of women-only rooming houses that survived until the 1990s) on Indiana Avenue. The two struck up a friendship, going to the theater together regularly (and, in some accounts, rooming together), before Davis decided she didn’t want to see Jeanette anymore, presumably after Jeanette declared that her love was not platonic. Jeanette didn’t take it well, continuing to show up at the Eleanor Club and sending gifts and money. And then she sent one with a bullet enclosed, threatening to kill Davis and herself. The letter reportedly read, in part, “You probably don’t understand how a girl can love another girl as I do you.”

A few days later, April 28, 1921,  Jeanette appeared at the Madison and Wabash L platform. When Davis got out of a train, Hoy shot her, then ran down the stairs and into the alley (I’m thinking the one behind the Chicago Athletic Association, though there are a couple of alleys around there – it may just be wishful thinking on my part because I love that place so much!), where she shot herself three times. Both young women were taken to St. Luke’s Hospital, where they recovered. The Tribune story was headlined “Girl Shoots Her Chum, Tries to End Own Life – Bullets Reveal Strange Friendship” and spoke of Hoy’s “unusual attachment.”  The case made national news, including a write up in the New York Times.

Hoy was naturally taken to court, but Davis eventually waived the more serious charges against her former friend, and Hoy was only fined $100 and costs (and eventually had to pay Davis $5000). However, two years later, Hoy was back in the news after threatening to kill an 18 year old woman named Anna Melbuhr, after circumstances that papers described as nearly identical to her case two years before. The last I’ve seen of her in the news is from the day after her threat to Anna, when she was reportedly taken to a “psycopathic hospital” for observation.  Though there are a few people named “Jeanette Hoy” who appear in papers decades later, I’m not sure yet whether any are the same person. I’ve only just started looking, but so far I’m not sure whatever happened to Jeanette after 1923. It’s a mystery in progress. There might be some records on her in the state archives, and surely more first-hand accounting in the Chicago papers that I haven’t checked yet. I ran into the story in the Evening American archives on microfilm while researching a whole other story; the other papers of the day (Daily News, Herald Examiner, Journal, etc) probably covered it as well.

What’s interesting now is simply to read the way papers described the relationship between the two. The Evening American spoke of Davis as a victim of a “Girl Love Shooting,” and the Tribune said that Hoy “fancied herself the victim of unrequited love.” Elsewhere there’s talk of “strange friendship,” and a “weird love affair.” Somewhat remarkably, though, I haven’t seen any that editorialize much. Other than words like “weird” or “unusual” showing up now and then, they pretty much treated Jeanette the way they’d treat any other jilted lover.

It’s easy now – and certainly tempting – to see Hoy as a victim of her times, when lesbianism was far less understood and sometimes treated as the sort of thing that, all by itself, could get you sent to a psychopathic hospital.  But it also important to remember she shot a person and threatened to do it again; she clearly needed some sort of help, at the very least. Given the times, though, it’s unlikely she would have gotten the sort she really needed. There’s a chance that after 1923 she simply got married and changed her name, but the fact that she seems to vanish from the record after being sent for observation is ominous, to say the least.