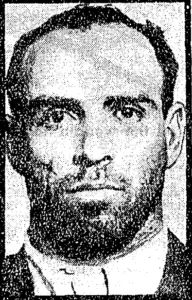 (This is a somewhat revised repost of an old four-part series published here when FATAL DROP: TRUE TALES OF THE CHICAGO GALLOWS  first came out. Since I told the story of James Tracy’s near-revival after his 1882 hanging the other day, I thought I’d make one big post out of this one).

In December, 1920, Nicholas “The Choir Singer” Vianna was hanged in the old Cook County jailhouse on Illinois Street. His hanging was a bizarre present for his 19th birthday.

Nicholas was, in fact, a teenage choir boy – and a heck of a singer – when he wandered into a 22nd street pool room around 1917. A week later, he was a criminal. The pool hall was run by a man known only as Il Diavolo – Italian for “The Devil” – who taught the kids who came into his pool room to commit crimes.

The gang was an offshoot of The Black Hand, the Italian gangs that had terrorized the city before prohibition – whenever an Italian came into property, he could expect to get a letter from the Black Hand demanding money. If he didn’t pay up, that property would be bombed. If he STILL didn’t pay up, his family could end up murdered. The Black Hand was responsible for hundreds of bombings over the years, and Death Corner, an intersection in Little Hell (a sicilian neighborhood that would eventually be torn down to make room for Cabrini Green) averaged about a murder a week for most of the 1910s.

But Black Hand operations were only a sideline to the gang on 22nd street, led by the mysterious Il Diavolo, who was, in reality, a shadowy mug named Sam Cardinelli (or Cardinella; the records vary). In his pool room, he taught kids to run hold ups, and how to kill. He’d send them out on errands, then take a cut of the the money. As often as not, he’d then cheat the boys out of their cuts with loaded dice. One wonders if Cardinella thought “Oliver Twist” was a how-to manual.

Each crime the gang commited was a puzzle to the police – no thread seemed to connect them until a few members of the gang were captured in 1920. When they began to confess, it came to light that they’d been responsible for about 400 hold ups, and a few dozen murders, in just the last six months.

“I was only a boy when I went into the pool room,” said Nicholas Vianna, who had killed over a dozen people. “A week later, I was a criminal.” Vianna gave crucial information that helped send Cardinella to the gallows, but withheld a great deal more, even though it sealed his own fate, for fear that Cardinella would have his mother and sister killed.

Sam Cardinella himself scared the hell out of the guards, who had seen everyone do everything twice. The county physician later said “If I were superstitious, I would say there was something satanic about it.” Others would later describe him as “a human spider, crawling the city, spinning a web of death, and sending boys to carry out his fatal instructions.”

In prison, he was surly and unpleasant. Most of the prisoners ended up making friends with the guards, but Cardinella freaked them out. In prison, he began to refuse to eat, and eventually lost about forty pounds.

The night before his hanging, he was visited by his wife and six children, and finally broke down, crying. The site of this evil, frightening man weeping like a remorseful family man only freaked the guards out further. He spoke in such a thick sicilian dialect that even those who spoke the language couldn’t understand a word he said – except for the name “Viana,” which he repeated over and over.

The next morning, as he was led to the gallows, the frail Cardinella broke down completely, collapsing into hysterical fits. Unable to get him to stand, the guards eventually had to tie him to a chair, and he was hanged chair and all. When he was dead, the body and chair were cut down and released to the custody of his friends, who brought it out to a waiting ambulance.

Inside the ambulance, prison officials noticed a couple of men who appeared to be doctors. Wondering what was going on, the warden ordered the men to hold the ambulance in the jail yard for an hour. Soon, the reason Cardinella had been talking about Viana would become chillingly clear.

After an hour, the prison officials opened the ambulance and saw a team of doctors trying to revive Sam Cardinella’s corpse. One was injecting stimulants into his chest. Another was pumping him with electricty. A nurse was rubbing his wrists.

Suddenly, the reason for Cardinella’s behavior in prison, and his gallows break down, became clear: it had all been a ruse to insure that he would strangle to death. Most prisoners wanted their necks to be broken by the drop, but if the neck was NOT broken, there was a chance – a very, very remote one – that the prisoner could, in theory, be brought back to life.

By losing forty pounds, Cardinella decreased the amount of pressure that would be put on the noose. By faking a break down and being tied to a chair, his neck began the drop a foot or two lower than it would have if he had been standing, leading to a shorter, less violent drop. Indeed, his neck hadn’t broken – he had strangled to death.

The warden ordered the ambulance to go straight to the undertaking parlor. They were followed by the county physician, who confirmed was Cardinella was, in fact, dead, and would stay that way.

It was only later, though, that they realized why Cardinella had been talking about Nicholas Viana the night before:

The reason Cardinella had been saying viana’s name was to assure them that he was going to be brought back to life the next day. Apparently, the great revival plan had already been tested on Viana – and it had worked.

The story is impossible to confirm; it was told in whispers by prisoners over the years, and got back to the county physician. They were able to confirm that Viana’s body had been transported by his friends in a basket lined with hot water bottles into a waiting ambulance that was filled with nurses and doctors, but THAT ambulance was allowd to leave.

According to the stories told for years by prisoners, that ambulance had been driven to a nearby funeral home where the body was laid out on a slab. A team of doctors ministered to it while strange men in robes stood around chanting something – no one knew what – in Sicilian.

And, after several minutes, The Choir Boy opened his eyes and began to groan.

The doctors stepped back and the chanting ceased, and soon the boy’s eyes closed again. He was a traitor to the gang; no one ever intended to allow him to live. The whole thing had only been an experiment to see if Cardinella, too, could be brought back to life later on…

Whether this story was quite true will never be known; at least one book states that the whole story about Cardinella was made up by reporter Ben Hecht in his book “Gaily, Gaily.” This is incorrect; the story there was about a gangster named Frankie Piano who was hanged in 1910 (there was no Frankie Piano, no one was hanged in 1910 in Chicago, and the story about Cardinella was first reported in papers very shortly after it occurred; the detailed version was told by the county physician, an eyewitness, nearly 3 decades before the Hecht story was published. Hecht was probably really talking about Harry “The Lone Wolf” Ward, one of Cardinella’s fellow prisoners). From eyewitnesses, it can be fairly well determined that there was, at least, an attempt to revive Viana, and that Cardinella believed that it had been a success. His friends, those who had been involved in the experiment, must have come out of it with at least enough faith to try it on Cardinella himself.

But maybe they knew that it would never work. Cardinella was a master at using people’s supersitions to frighten them, to hold them in his power. Perhaps his friends were afraid to refuse to carry out his wishes, even after his death.

More hanging stories are in FATAL DROP: TRUE TALES OF THE CHICAGO GALLOWS