On the old Sobieski Street, where once upon a time arch-fiend H.H. Holmes had a “glass bending factory” (which was more likely a place for cremations; the man had no real idea of how to bend glass), we’ve had plenty of odd nights on the tour. Even in the summer, the trees on the sidewalk, right near the space where the entrance to the factory would have been, look menacing if you look up into their twisting branches. In the winter, when the leaves are gone and the branches are like rattling bones twisting towards the sky, they look like trees from a Tim Burton movie. And the other night, a woman on the tour pointed something out to me: one of the two trees was oozing with blood red sap. 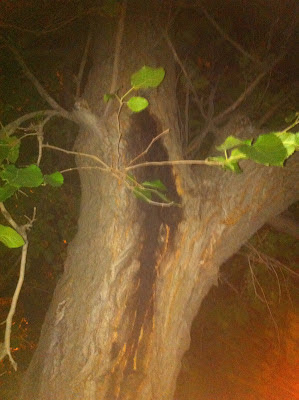 Now, don’t get me wrong here: I’m not honestly saying that the tree was dripping blood. It LOOKED like it was, but there’s likely a scientific explanation; indeed, the woman who pointed it out was a geologist, and explained that sap can turn red if the tree has absorbed a lot of iron oxide out of the soil (and standing next to a vacant lot that was a junkyard once, and right near the railroad tracks, it’s quite likely that it absorbed a LOT of iron oxide).

Still, sometimes it’s the details like these that make haunted places stand out. And, anyway, who’s to say that high levels of iron oxide don’t act as a catalyst for making ghosts appear? That sounds like the kind of thing they’d say on any number of those ghost hunting TV shows.

update: also, this seems to be one of those cases where for every expert, there’s an equal but opposite expert. A biochemist on the tour recently told me that iron oxide wouldn’t get into a tree, and that this would more likely come from a fungus. The tree is now dripping from TWO places. The good news is that if it drips on your clothes, it’s washable. I found this out the hard way.