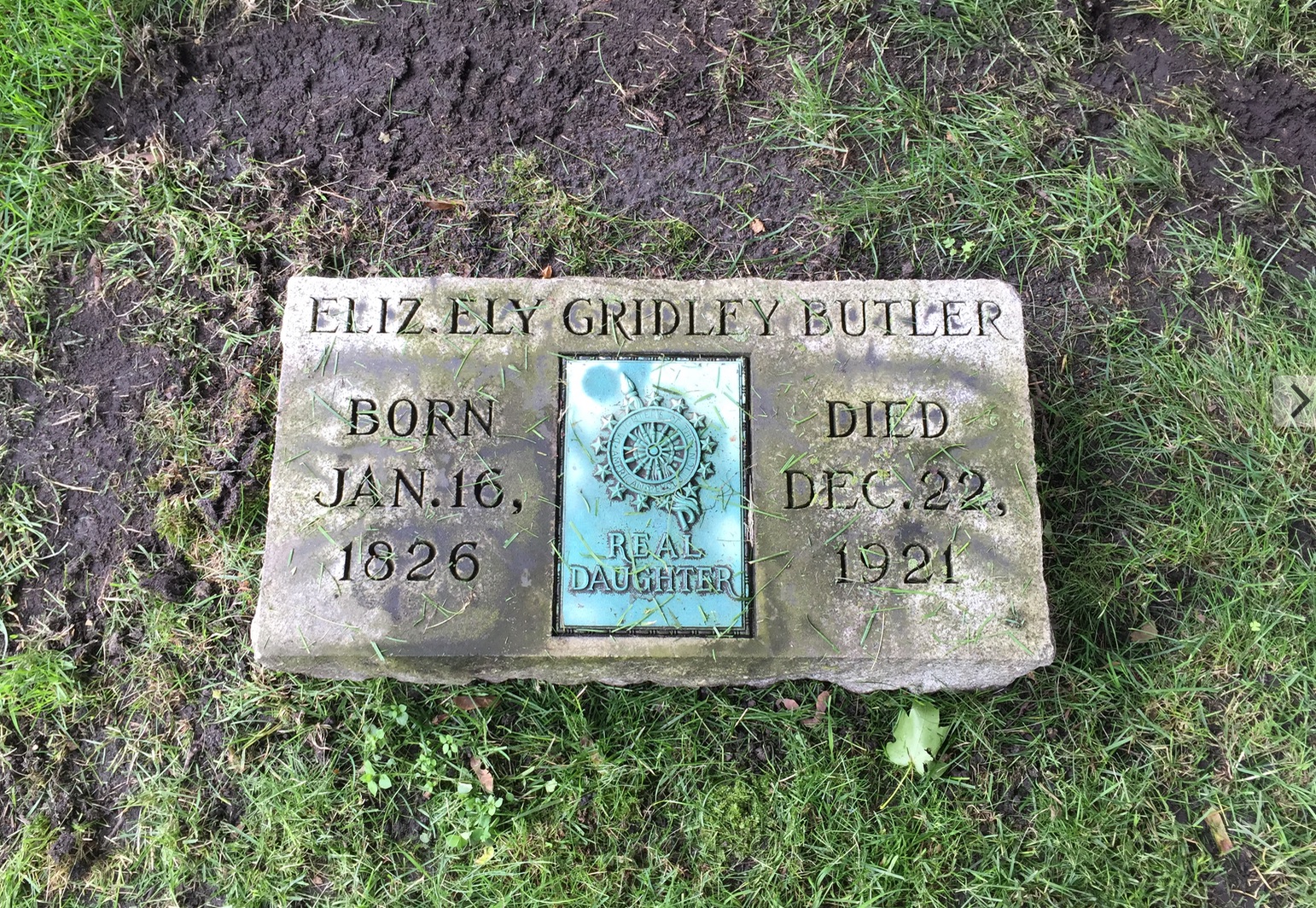 As a cemetery tour guide, on my favorite things is finding great stories that have escaped the history books – it’s often just a matter of finding an interesting headstone and looking up the name. But which stones to choose? The most obvious are the big and impressive ones, but sometimes it can also simply be a person with a strange name, or an interesting symbol.

One of these was Elizabeth Ely Gridley Butler, whose stone includes a “Real Daughter” plaque, signifying that her father was a Revolutionary War soldier. These are very rare in Chicago, where no verifiable Revolutionary War veterans are buried (we’ve covered the two supposed ones, William DuVol and David Kennison, a time or two before). But what struck me about Elizabeth was her birth date – 1826. I figured there had to be a story there, as the youngest Revolutionary Veterans in 1826 would have been comfortably past middle age.

As it turns out, her father, Theodore Gridley, of Clinton, NJ, served for seven months in the New York state militia during the war; family legend a century later said that he fought in the Battle of Bunker Hill (the war service is backed by records, though they indicate that the Bunker Hill part was probably not true). It wasn’t until around 1816 that he married Amy Ely, who was already 40 years of age – very old to be getting married in those days.  In 1825, according to an 1875 Tribune article, the two of them rode in a carriage to Boston to see the cornerstone laid for the Battle of Bunker Hill memoriale, and heard Daniel Webster speak.

Amy was nearly 50 years old when Elizabeth, her only child was born; Thomas died the next year, and Amy moved to Chicago in 1854, when her daughter married G.S. Butler there, and lived there for a rest of her life. The family hid in a cabbage patch outside of the city limits during the Great Chicago Fire, by which time Amy was close to 95 years old.

She survived the fire, though was a bit worse for wear. Her hearing began to suffer, and she stopped taking daily walks. By 1875, the Tribune said that her chief form of amusing was “rumpling handkerchiefs, from which she seems to derive considerable amusement.” It also noted that “unlike the conventional old lady, she does not smoke a pipe or require much attention.”

Amy Ely-Gridley died in her daughter’s home in 1876, and, at 99, was thought to be the oldest woman in Chicago. According to Graceland Cemetery records, she is buried in the unmarked spot directly next to her daughter’s. I’ve exchanged a few emails with the D.A.R. in hopes of getting a marker placed there, but nothing has come of it yet (possibly because Amy was Theodore’s third wife). Here’s hoping! Amy is a part of history who deserves a memorial of her own.

1 thought on “The Unmarked Grave of a Revolutionary War Widow”