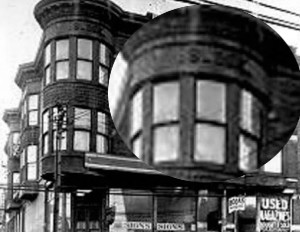 Some debate has come up lately about the cryptic words that appear in some later photos of the HH Holmes “Murder Castle.” No photo has emerged that’s really clear enough to read it, but there were some words carved into the turret at one point. They would not have been present in any version of the castle Holmes ever saw; they were added when the top two floors were rebuilt after the 1895 fire.
Here’s a shot of the castle from the late 1930s, shortly before its destruction, with a zoom-in on the turret: 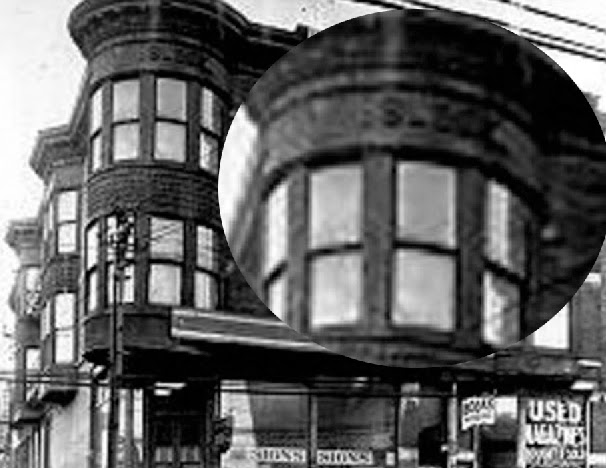 It’s hard to read, and had possibly been damaged by the late 1930s, but earlier shots make it clear that the word was “block,” and that another word had been on the left at one point.
Here’s the clearest shot I have, taken from a 1914 article on the death of Patrick Quinlan (the guy I always describe as “the Igor of the Murder Castle”). The picture was probably old; a murkier, cropped version of what I think is the same photo was in the Chicago American in 1905. During this period, the castle had a stylish pointed turret that I think might have been removed after a fire in 1907: 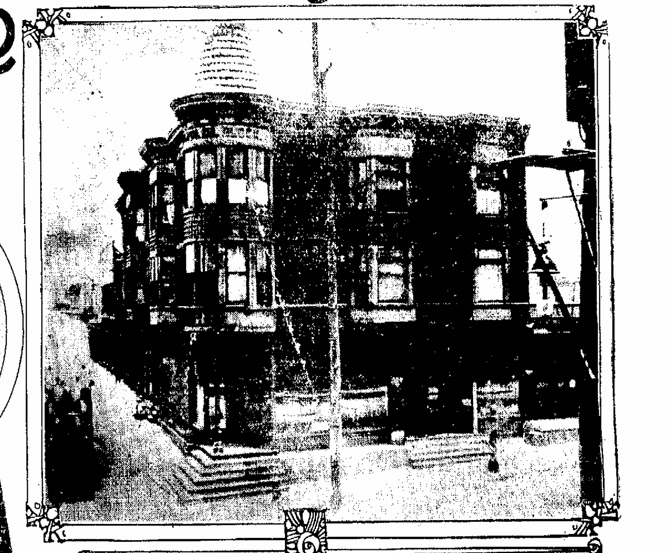 And a zoom-in on the turret from this shot: 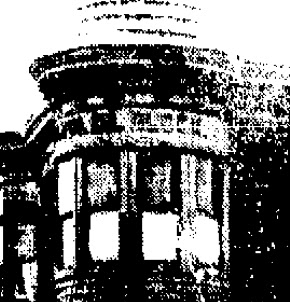 That the second word is “Block” is quite clear here – for buildings this size to be called “____ Block” was quite common at the time. But what’ the first word?
A comment I had in 2009 or so said that the building used to say “Campbell Block,” and that “Campbell” was later removed. Holmes used the name HS Campbell for most of the legal dealings used for the building. However, by the time it was rebuilt, he no longer had the title or mortgage to the building. At the time of the Aug, 1895 fire, the building (and its insurance) was held by the Frank Chandler Co, which owned dozens of properties around the city and around Englewood; Chandler spoke to the press a bit during the investigation, and after the fire (when it was noted that the paperwork regarding the title and the insurance were a huge mess).  They already seem to have held some title to at least a portion of the place as early as 1889, when the name “Frank Chandler” starts showing up in paperwork related to the lot.
Anyway, the grainy photo may be from about 1905, which is also when Chandler seems to have had to sell off all the properties.
Several real estate listings from 1904 and 1905, when the properties were on sale, refer to the building as “Chandler Block.” Like this Trib classified from 1905:

Now, this brings in some mysteries of its own. The building was three stories, and 45×100 is smaller than most measurements (maybe the candy store in the rear of the first floor, and the extended space behind it, were lopped off when it was rebuilt? The fire started in the candy store).  However, it’s definitely the Castle building – that was the exact address prior to the 1909 renumbering, and a couple of Englewood papers from the same period talking about the sale specifically refer to it as the old “Holmes Castle.”
Now, the weird thing to me is that in that early 20th century shot, it does look a bit more like “Campbell” than “Chandler” to me! The digitization isn’t that clean; it’d be better if I could get a proper microfilm scan of that issue of the Ogden Standard‘s pull-out magazine, but I’m not about to take a trip to Ogden, Utah to find one!  The most likely scenario here is that it’s just hard to read the pixelated version, but that it said “Chandler Block,” and the name “Chandler” was chipped off after Chandler no longer held it, presumably by some buyer who never got around to adding a new name.
Keeping in mind, of course, that this is not a version of the building Holmes ever laid eyes on. The fire in August, 1895 during the investigation didn’t burn the whole building to the ground, but the top two floors WERE removed and rebuilt. They looked very different before, as seen in the surviving photo: 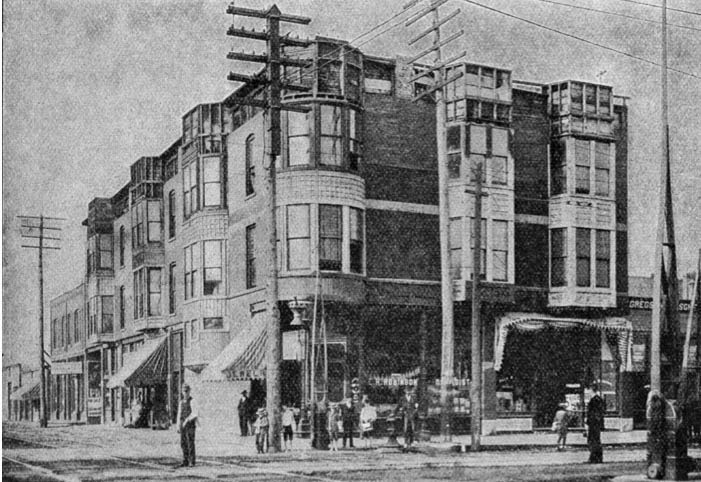 There is one photo that I saw elsewhere around this time this post was published,  and which shows it more clearly, but I didn’t know where the shot came from. I finally found a decent copy in a 1943 newspaper. This is a bit blurrier than the version I saw first, but makes it a bit more clear that it was, in fact, Chandler Block. The DLE part is pretty legible here: 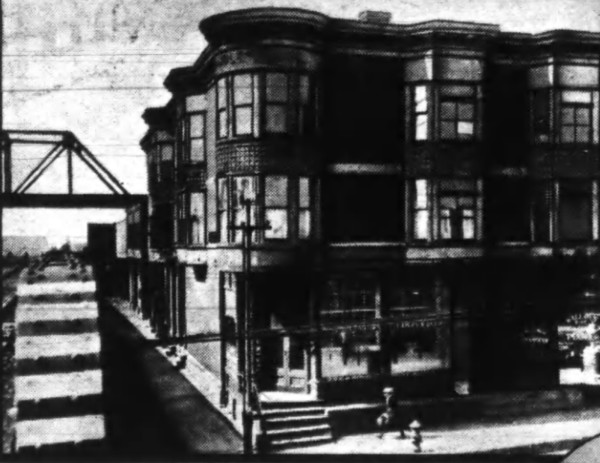 8 thoughts on “The Words on the Holmes Murder Castle”