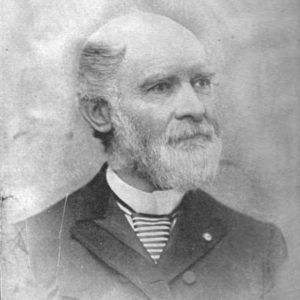 Connections between HH Holmes and the World’s Fair and Columbian Exposition of 1893 are mostly fictional – though he did claim he was adding a third floor to his building to serve as a hotel during the fair, the “hotel” was never open for business, and the notion that he was preying on fair patrons was just something a New York newspaper casually suggested, and which gradually got folded into the legend. The number of people who came to the fair, went missing, and can honestly be connected to him is exactly one – Nannie Williams, who came to join Holmes and her sister Minnie in Chicago that year.

But, while Holmes didn’t see the fair as a great opportunity to murder people, he DID see it as a great way to make money. Nearly everyone in town did. By claiming to start a hotel, he was able to swindle investors, supplies and insurers galore.

By 1893, though, he’d already completed his biggest connection to the fair: swindling Thomas B. Bryan, the vice president and “commissioner at large” of the exposition.

Bryan had come to Chicago in 1853, when it was still a young town of just 30,000 people – early enough that later articles called him a pioneer. Though he set up as a lawyer at first, he got involved in real estate investments that proved lucrative, and by the time he met Holmes, he had been a pillar of the Chicago community for decades. He was the founder of Bryan Hall (a popular meeting place and lecture hall in Civil War era Chicago) and the founder and first president of Graceland Cemetery (a newspaper note from 1861 notes that he was arranging for an omnibus connected to the North Chicago Horse Railway to make daily trips to the cemetery; the fare would be eight cents). An now-amusing note from the Cemetery that year bragged that it was “sufficiently remote from the city never to be encroached upon, no matter what may be the prosperity of Chicago.”  This was fairly silly to say even then; at the opening ceremonies a year or so before the Tribune noted that it would be part of suburbia “at no distant day.”

. In 1865, he introduced people like General Grant and General Sherman at the Great Northwestern Sanitary Fair. He later served as commissioner of the District of Columbus under President Hayes.

By 1891, he was working from an office in The Home Insurance Building (whose steel frame construction made it a landmark itself; the first modern skyscraper) and acting as Vice President and Commissioner at Large of the upcoming World’s Fair. In this capacity, he traveled the world, meeting with people like the pope to promote the interests of the fair.

Somewhere along the line, a fellow named Frederick Nind persuaded him (by sheer persistence and making a pest of himself) to become half owner in The ABC Copier Company, a company designed to sell a copy machine for which Nind had bought the patent in England. But Bryan seems to have almost immediately wanted out, as he had no real time to manage a copier machine business himself, and Nind began to look for a buyer. In late 1890 or early 1891, he met HH Holmes and told him all about the opportunity.

The connection to Bryan is what seems to have interested Holmes the most; H.W. Darrow, who ran a cigar shop in Holmes “Castle” building, later said that Holmes told him that this Bryan fellow seemed “like good fruit for a sucker.” Holmes offered to buy his half share of the business for around $7000. Bryan agreed, on the condition that his name not be used to establish credit or connections.  Holmes paid him with a promissory note, the proceeded, naturally, to use Bryan’s name to establish credit and connections all over town, eventually borrowing thousands of dollars that he had no intention of repaying.

Here’s an excerpt from a deposition Bryan gave as part of the endless lawsuits that came from these borrowings:

Q: Had the business which this company was organized to carry on been previously carried on by some other company, firm or person?

A (Bryan): No, but it has since February 1891 been improperly attempted to be carried on by a man by the name of Holmes.

Q: The same one who is now president of the company?

A: He has no office. He assumed some office, but he was never appointed.

Q: He assumed the office of manager?

A: I don’t know what he assumed, but he assumed something. He never was actually appointed. He was an assumed officer.

The sheer amount of the promissory note, which Holmes (of course) never paid off, may qualify Bryan as Holmes’ single biggest swindling victim. His frequently given motto, “Take care of details, beware of cocktails,” indicates that he was what we’d now call a “detail oriented” man; in his notes to investors and his deposition, you can see how frustrating his light dealings with Holmes made him – it almost seems that it’s less about the money and more about Holmes’s exasperating tendency to obfuscate details!

Bryan died of heart trouble in Washington D.C. in 1906; he is buried there, far away from the cemetery he founded.