Tom Lehrer, one of the most successful satirists of the 20th century (and now the J.D. Salinger of comedy music), split a bill with Odetta at Orchestra Hall here in Chicago in April, 1958. The Trib described Lehrer as a guy who “sings weird songs and makes much moo.”

Just throwing this out there to add to the list of “concerts I really wish I could have seen.” Lehrer (perhaps best known today for the “Elements” song, though I’m in “Irish Ballad” man, myself) hasn’t played a concert in close to 50 years. 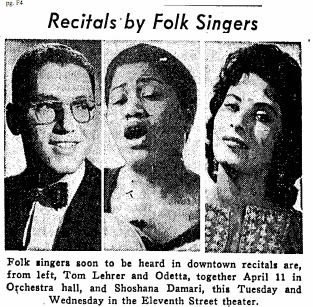 I also wouldn’t have minded seeing Bob Dylan at the Bear Club in 62, or the press conference at the Astor Hotel where John Lennon was asked to apologize for saying the Beatles were bigger than Jesus. A Beatles press conference would probably be more fun to see than one of their concerts – every bit as much of a performance, only you could hear what was happening.