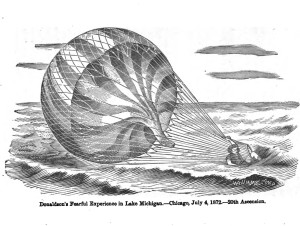 “The next record I have of Donaldson (performing a hot-air balloon ascension)  is at Chicago, IL, July 4, 1872, filling his balloon in Green’s Garden, preparatory to giving Chicagoans a blood-curdling sensation, as they never feel satisfied until they kill someone or have an explosion or conflagration that will startle the world.”  – M.L. Amick, History of Donaldson’s Balloon Ascensions

Now that air travel is so dull,  it’s hard to imagine a time when people would cram into a theater just to hear about what it was like to go up in a hot air balloon. But Washington Harrison Donaldson would do balloon ascensions by day and pack people into theaters at night just to tell them how it felt to soar above the clouds. And he didn’t just soar – he’d go a mile in the sky and do an aerial act from a trapeze that dangled beneath the balloon. Even now, that sounds pretty damned impressive. 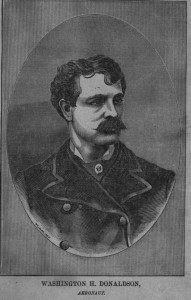 Donaldson came to Chicago twice – once in July of 1872, and again in July of 1875. His fourth Chicago “ascension” would prove to be his last; he and a Chicago Evening Journal reporter perished (presumably) when the balloon was lost in a storm over Lake Michigan.

On the podcast, I tell about Donaldson, read accounts of the Fourth of July celebrations from 1872, discuss rumors that he miraculously survived, tell how he described the city as it appeared from above only months after the Great Chicago Fire, and even chat a bit about a real-life Bad Bad Leroy Brown who terrorized the south side of Chicago back in 1900. What, exactly, became of Donaldson’s balloon is one of Chicago’s lesser-known unsolved mysteries (in that the wreckage was never found); don’t forget to check out our upcoming Unsolved Mystery Tour. Roll up!

Check out a recent book on Donaldson: