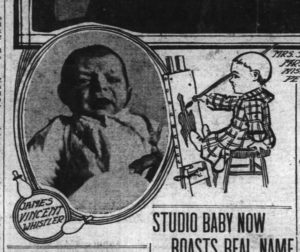 Tree Studios on E. Ohio Street opened as an artists’ colony in 1893, and right from the start the papers loved telling crazy stories about the bohemians and weirdos who took up residence there. It’s always been fun to make fun of hipsters.

Tree, which is still standing as an event space, became home to several prominent writers and artists over the years, and stories about things that happened there could probably fill a book on their own. But even prominent artists whose work was mostly very formal, “high brow” work in traditional disciplines could be total bohemians and free spirits, and one enduring mystery they left behind stands out to me: Whatever became of Baby Rembrandt, the baby boy left in the studio that they artists decided to keep?

Officially, Tree Studios was a “no children allowed” zone in 1902 – the owner thought they’d spoil the mood of the place. But in July of that year, artists were surprised to hear the cries of a baby coming from the door. Janitor Edward Torrey ran for the Ohio Street entrance and found that a three week old infant had been left in a basket on the doorstep, wrapped in a shawl and a petticoat.  The screaming baby was brought inside, and the artists decided they simply had to keep him and raise him as an artist. They named him Rembrandt Michael Angelo Tree Torrey I. It was announced in the press that Torrey and his wife would adopt the baby, but it was understood that it would belong to the artists, half a dozen of whom immediately began to works in shifts as babysitters.

Though it’s hard to imagine that the city didn’t immediately get involved and take the baby elsewhere, the child became sort of a celebrity in the city. A milk company donated all the necessary formula, and it was reported that little Rembrandt was chugging down 15 bottles per day. One paper said that “he is to be brought up on novel lines; that is, he is not to be hampered in any way, and will be allowed to follow his own inclinations.”

At the end of July, five of the artists appeared in court, where they were given some sort of guardianship, and the child was given the more formal name of James Vincent Whistler, after the recently deceased painter. Those named as guardians include several artists who went on to be reasonably well-known: Julia Bracken (sculptor), Geneve Rixford Sargeant (painter), Louis Tipton (composer), John Johansen (painter), and Marie Gelou Cameron (painter). Bracken may be the best known; in 1893 she had worked on several architectural sculptures for the World’s Fair, and several of her pieces are still prominently displayed around the world.  Johansen would be hired to paint the first official portrait of President Hoover.

After the judge formalized the guardianship (or some sort arrangement), a couple of charity events were held for the baby’s welfare. As of early September, it was said in the press that the child was currently residing at St. Vincent’s home, but that his five guardian artists were arranging for him to be adopted by “a childless young wife of culture and sympathy and with their ideas as to his rearing.” Though it was said that she was an artist’s wife, the names were not disclosed.

Most of the early September data comes from a Boston paper reprinting a Chicago American article for which the microfilm reel is missing at the library here; it’s possible that the original had more data, or that the American later gave an update that I haven’t stumbled across yet and wasn’t reprinted by any paper that’s been digitized. So far, though, I’ve found no data on what became of the baby after September of 1902. It’s likely that he didn’t keep the name of James Vincent Whistler. Though a couple of possible matches to that name come up in the census records, there’s no one I can definitely connect to the “Tree Studio” baby.

There may be more clues in the probate records, but for now it stands as a strange story from a time when adoption was a very different process!

One thought on “Whatever Happened to Baby Rembrandt?”