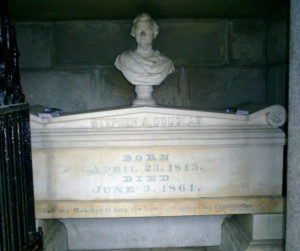 As of the 1830s, when Chicago was just rising up from its status as a mudhole on the prairie, the law in Illinois was that anyone could vote in the state as long as they’d lived here for sixth months (Well, provided that they were white, male, and over 21). This included people who weren’t citizens.

Late in the decade, a judge ruled that “aliens” couldn’t vote, meaning that some 10,000 immigrants – mostly German and Irish – would be inelligible to vote in the 1840 election. 90% of those immigrants were estimated to vote democratic, and the Whig party began scheming for ways to disenfranchise them.

In 1839, one Whig sued the other, an election judge, for having received the vote of an alien, and a judge (who was also a Whig) ruled for the Plaintiff. This meant that immigrants would no longer have the vote – with a tight 1840 presidential election looming.

The Democrats challenged the ruling. When it come up in the courts in June of 1840, a lawyer found a typo in the complaint – it mentioned the election judge receiving a vote from an alien in 1839, when it had actually been in 1838. This was enough to get the case pushed back to December, after the election (in which the “alien vote” quite likely pushed Martin Van Buren over the top in the state; he only beat William Henry Harrison by around 2000 votes).

The case was dismissed in December based on a technicality, but Democrats feared that the Whig-dominated court would still soon rule that only naturalized citizens could vote, and introduced a bill that would increase the number on the bench to nine. The bill passed, was vetoed, and the veto over-ridden by a margin of one vote.

Among the five new judges was Stephan A. Douglas, who served in the role for a few years before being elected to congress. Years later, he tried to skewer Lincoln in the famous debates for not accepting the Supreme Court’s ruling in the Dred Scott case, insisting that even if one didn’t agree, it was the duty of all citizens to accept Supreme Court rulings.

Lincoln remembered the “alien vote” case and was having none of it. In their debate at Quincy, he railed “Didn’t judge Douglas find a way to reverse the decision of our Surpreme Court when it decided that… Governor carlin had not the constitutional power to remove a Secretary of State?.. And didn’t he himself sit down on that bench as one of the five added judges, who were to overslaugh the four old ones – getting his name of ‘Judge” in that way, and no other? If there is a villainy in using disrespect or making opposition to Supreme Court decisions, I commend it to Judge Douglas’s earnest consideration. I know of no man in the State of Illinois who ought to know so we about how much villainy it takes to oppose a decision of the Supreme Court as our honorable friend Stephan A. Douglas. “

The new court system remained in place until the new state constitution was written in 1848, which knocked the number of judges back to three.

It’s interesting here that the democrats were pushing for immigrants and voting rights – interesting in that I seldom agree with democrats when I’m reading things from this period (the people who think that being a democrat today means you’re bound to support their positions from 1860 strike me as an odd, rather stupid bunch). Notably, the guy credited with being the one vote that saved the bill was Ebenezer Peck, a democrat at the time who later joined the new republican party to support Lincoln.

But immigration was a different issue then – both parties broadly believed in open immigration with few to no restrictions in those days. None of the “alien” voters would have been called “illegal immigrants” because there wasn’t any such thing at the time – all you really had to do was show up and step off the ship to be a legal immigrant, and most states allowed resident aliens to vote in 1840. It was a generation or so later that the rules began to change.

These days, only eleven local governments allow non-citizens to vote, and it’s only in their own local elections, and almost all are in Maryland. Federal law prohibited non-citizens from voting in federal elections in 1996, but by then no state had allowed it in decades.