No topic around here keeps my occupied quite like tracing the career of H.H. Holmes, the Devil in the White City guy. Figuring out what really happened and separating fact from fiction is notoriously hard. Lately, I’ve been in the process of organizing all of my data, cataloguing all the stuff from the microfilm room at the library (defunct Chicago papers – you want to stick with Chicago papers for the Chicago stuff), and going through all of the thousand or so papers and articles and making notes of all the locations mentioned in them. I now have a map showing about 60 places in Chicago we can probably trace Holmes to – most of them are businesses in the loop that he’s known to have swindled at various times, and whose names and/or addresses were published in contemporary documents. Four or five are still standing.

One that I just went to check out today was a possible address for Minnie Williams, one of the hardest characters in the saga to figure out. There are/were a LOT of conflicting accounts to what Minnie was like, when she disappeared, whether she was married to Holmes, or what. She seems to have told her sister that they were married, but whether Holmes set up a sham ceremony (it certainly wouldn’t have been a legal one) of if they were both lying is sort of an open question. She may well have been complicit in some of his schemes. I wouldn’t even say with complete confidence that she was actually killed; Holmes’ story that she’d run off to London to go into hiding isn’t quite as far-fetched as some of his other ones.

There are a number of addresses for her that appeared in various papers, and one of them is still standing. 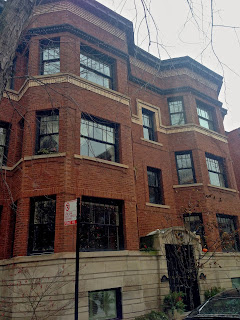 Minnie seems to have come to Chicago around January, 1893, having already met Holmes in some capacity or another. In January, she wrote a few letters to a man in Leadville, Colorado, who later spoke with the Rocky Mountain News. The letters had varying return address; one was the famous “murder castle,” one was on Chicago avenue, and one, dated January 18, was from Roslyn Place, a street just above Lincoln Park (a great many of the Minnie-related locations on the map are in that general vicinity).  After checking the re-numbering guides (the houses were all renumbered in 1909), I found the address, and found that it was still standing. That’s it on the left, just off East of Clark Street. I’m assuming the story in the Rocky Mountain News was accurate on the simple basis that I can’t imagine where they would have pulled the address from if the guy didn’t actually have the letter.

Rosyln Place looks, as you can see in the photo above, just like the kind of street we like to imagine Victorian serial killers stalking, doesn’t it? Whether Holmes ever met with Minnie here is difficult to ascertain, but it’s fairly likely. He seems to have been no stranger to the area; he claimed to have stayed in a hotel on the west side of Clark, opposite Lincoln Park, at one point, and an insurance invesgaot in 1893 found him (and perhaps Minnie) living at the Plaza Hotel, which was just below Lincoln Park, where the Latin School is now.  I wonder if he ever went to check out the Couch Tomb?

2 thoughts on “Where Was HH Holmes? A North Side building still standing”