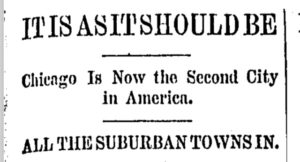 I swear I don’t have a major axe to grind against my fellow tour guides spreading bad information – we all repeat stories and facts that turn out to be wrong now and then, no matter how hard we try –  but I do seem to have a lot of posts clearing up common “tour myths,” and I’m particularly irked that a lot of companies actually require them to be told. I’ve worked for companies that expect their guides to stick to a particular outline, if not an outright script, and those outlines tend to be full of misconceptions, outdated facts, and outright myths. In the past, I’ve covered how the term “windy city” did not start with World’s Fair boosters being full of hot air, the myths about Samuel Insull building the Civic Opera House for a wife/daughter/girlfriend who couldn’t make it in New York, the story that Al Capone had a speakeasy under the dome of the Jeweler’s Building, and the tale that sculptor John Storre thought no building would ever be taller than the Board of Trade. When enough guides tell a story, others pick it up, and next thing you know, everyone just assumes it’s true that cholera killed 90,000 people in one year in the 1880s, that HH Holmes killed dozens of fairgoers, or some other such “fact” that isn’t even close to true.

These days, running tours that leave from the south branch of the river, I hear a lot of tour guides talking about the Great Chicago Fire; as it started closer to there than anywhere else on a river tour route, it’s a natural place to cover it. And I while I hear plenty of false info (one company has their guides say we now know for sure that a lightning strike started the fire, which would require us to have a time machine), perhaps the most persistent lately is that Chicago is known as “The Second City” because the city that stands today was the second city built on the grounds after the fire destroyed the first one.

It’s a charming little fact, and a nice thing to tell ourselves as we nurse the eternal chip we get on our shoulder from living in New York’s shadow, but a look at the data doesn’t back it up one bit.

The term “second city” was common in the 19th century, always referring to the second-most populated city in a given region. For instance, you’d hear people talk about Lawrence as “the second city of Kansas.” By the time of the fire, people were starting to claim that Chicago would eventually surpass Philadelphia to become “the second city” of the United States.

Then, in 1889, the city of Chicago absorbed a few suburbs – places like Lake View and Englewood became neighborhoods instead of autonomous towns. This meant an instant growth in Chicago’s population, and (though Philadelphia and Brooklyn were working on absorbing suburbs and fighting for the honor) formally made Chicago the second city of the nation after New York. Annexation was necessary – the recent sensational Cronin murder, which left the various police departments mixed up and unable to work together properly made it clear that a unified city government was the way to go; within a decade New York would consolidate four neighboring cities into boroughs. But more than one person in 1889 accused Chicagoans of supporting annexation mainly because it would give them the “second city” title. So did a few people in Chicago suburbs who opposed annexation, though it was reported that nearly 15,000 people voted in favor of annexation, and only about 600 voted against.

For several decades, papers used the term almost exclusively to refer to the city’s status as the second most populated in the country –  try as I might, I couldn’t find one single use where they meant that it was the second city built on the grounds. There must have been a few out there that I just didn’t run across (sure the fact that the “second city” was the second city built on the grounds must have occurred to somebody), but the data is clear: when people said “second city,” they definitely meant second-largest.

But that’s not exactly how the nickname came to stick, either – the title of the second city bounced around a bit, going to Philadelphia for a while, and then to Los Angeles. In the mid 20th century, New Yorker writer A.J. Liebling began to write a series of articles about Chicago, which he absolutely detested, having lived here for awhile 1949 and finding it inferior to New York. The articles eventually became a book, Chicago: The Second City in 1952. It’s actually a pretty entertaining, fairly tongue-in-cheek affair poking fun at the city, which he saw as a town in decline, living in its past glories of the 1890s and the gangster era of the 1920s. It may not have been entirely unfair – in 1952 we hadn’t had a great new skyscraper in twenty years, the population was moving to the suburbs, Los Angeles was creeping up closer in the population race, and we hadn’t had an event like the World’s Fair in some time. The great skyscrapers of the Daniel Burnham era seemed hopelessly old-fashioned – all things Victorian were hopelessly out of style, and wouldn’t start to seem cool again for another decade or two.

Liebling’s book is apparently what turned the phrase “second city” from a title to a nickname; seven years later The Second Theatre theatre took its name from Liebling’s essays in an inspired bit of self-deprecation, and since then the term has stuck.

Here’s a 1959 Trib blurb mentioning Liebling after noting the opening of the Second City: 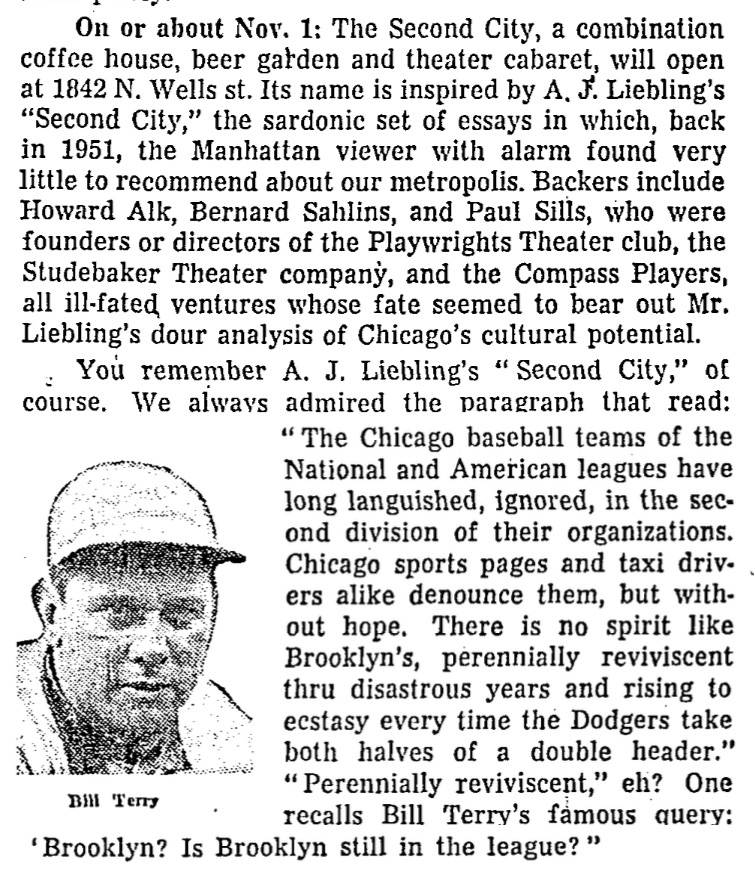