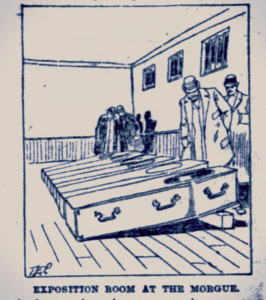 You know where the morgue is? The dead center of town.

In 1891 a new city morgue was erected at the county hospital – a pleasant looking place on the outside, but of the interior, a reporter for the Inter Ocean said “the arrangements are suggestive and significant and can not by inspected by an ordinary visitor  without a strange, creepy feeling taking possession of him. Suicide, murder, death from casualty, mysteries, grim, drawk, and unsolvable, come before the mind and one turns away with a shudder as if quitting an eerie place.”

One particular feature was the “exposition room,” which was full of new innovations. In earlier morgues, when bodies needed to be identified, they used a system of “water spray playing nude and oftentimes disfigured bodies” too keep them from decomposing too much (which I rather doubt would have worked).  In the new morgue, bodies would be placed in air-tight oak caskets with viewing windows over the face; “carbolic gas vapor” would be pumped in, and would preserve the bodies for three or four months.

The reporter calling on the place, P.W. Molloy, in good humor, and bursting with good stories to tell. One involved the body of a man found at Peck Court (the block-long street in the loop now called 8th Street). He was put on the slab at the morgueand a bump on his head made someone notice that his eye was twitching. A doctor was summoned, and by the time the doctor arrived the man was sitting up and wondered what the heck was going on.

The reporter then spent the rest of the article asking the morgue-keeper, and every undertaker he could find, whether it was possible that someone could be buried alive, a common fear at the time. Everyone had heard stories of it, but none of the undertakers knew of a single story they could verify – with one exception. At McLaughlin’s Undertaking Parlor, Mrs. McLaughlin related a story she’d heard from her late husband, the founder. In 1856 Chicago had been visited by one of its periodic bouts of cholera, and several people were buried quickly. When her husband was charge with disinterring and moving one of the dead men to a new plot, the body was found to be lying face down in the casket. Either he’d been buried alive, or something had made him roll over in his grave!

In  1892, there was a bit of drama there when an unidentified woman was brought to the morgue after being killed by a train. After she’d been there a day, a woman came in and asked to see the body. She stared at it for a moment, then said “I’m glad you lie there dead. It’s just what you deserve!”  She went on to explain to the morgue keeper that the woman was a former house-servant of hers – and her own husband had left her for the servant. She also noted that her now-ex husband had driven his first wife to suicide and nearly killed the second. She was wife #3. She declined to give the servant’s name, though, and the morgue keeper had to bury her under a name given by someone who identified her as someone totally different!