Nellise Child once wrote that when a man kills his wife, he usually kills himself, too. When a woman kills her husband, she decides that that’s enough for one day. You certainly do come across that pattern in stories of old Chicago murders.

I like to have a story for every block on my tours – you never know when you might get stuck in traffic and need something to fill time. If there are people out walking around, I can always mess with passers-by (a large black bus that says “ghost tours” is perhaps the single greatest instrument yet created for the purpose of messing with people), but you can’t always count on that, either. 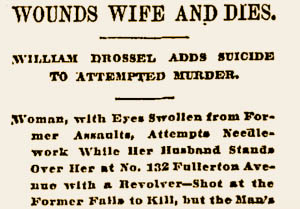 One big gap, for some time, was the block of Fullerton just west of Damen, containing the Midtown Athletic Club. We can stare at that gym for quite some time if traffic is bad on Fullerton as we’re leaving the Holmes “Body Dump.”
After some digging, I did find a story about the apartments that stood across from those grounds in 1897.
In March of that year, William Drossel and his wife were living near those grounds. Trying to murder his wife seemed to be a regular hobby of his over the previous couple of years. In the first week of March, he was arressted for beating his wife so badly that she nearly went blind. He was awaiting trail for the assault, and was said to be threatening to kill her before the trial could go down. Threats to kill her seemed to be a regular feature in Drossel’s activity; he had just been stopped by his daughter from doing the deed with a gun as recently as New Year’s Day.
On the night of March 12, the Drossels’ three children left the house after lunch (the oldest to a laundry where she worked). When they left, William gave his wife a pair of stockings and told her to darn them for him. She couldn’t see well, as her eyes were still nearly swollen shut, but sat down on a stood and started to work. William sat down to read a newspaper in the kitchen.
Then he got up and locked the door the yard.
At 3pm, he tiptoed into the pantry where his wife was still darning the stockings, holding a revolver he had apparently threatened her with many times. This time, he grabbed her off the stool, stood her up, and shot her.  Then he marched into the kitchen and shot himself in the head.
It was supposed to be a murder suicide, but William Drossel was not one of your more competent human beings. His wife had been shot in the hand, but not fatally. She leaped to her feet, yelling “Murder!” and ran to a nearby doctor’s office.
Minutes later, police broke down the Drossels’ door and removed the body to an undertaking parlor on Halsted. In the margins of the paper he had been reading, Drossel had written a German note translated as “To the officers: I have a note of $300 with which to pay my funeral expenses. I desire to be buried in Graceland. The three children are my heirs. Please, officers, I cannot live any longer with this bad tyrant.”
A few weeks ago, I went into the office at Graceland to see if he might actually be there. “I’m sure they just tossed him in a ditch or something,” I said. But, lo and behold, Drossel was buried at Graceland, up among the single graves on the northeast corner. The office wasn’t sure of the exact location – it’s probably unmarked – but thought they might be able to find it with some more research if anyone wanted to go and stomp on him.
Now, maybe I’m not being fair to old man Drossel. Maybe his wife really was an abusive tyrant. Maybe he wasn’t in his right mind. There’s even a chance that I’m wrong about the address – converted pre-1909 addresses can be a bit wonky, and there’s also a chance that it was actually just east of Ashland, kinda by the Mr. Submarine.  But I’m pretty sure the guy was a craphead.
(Visited 103 times, 1 visits today)