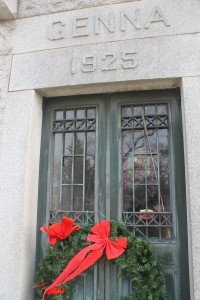 I’ve always had a fascination with the Genna Brothers, an early 20s gang that is nearly forgotten today, though they were known as particularly viscous hoods back in their time. Tony, left, was murdered half a block from my apartment. A couple of them were given funerals on my block, as well.
The Genna Brothers were a refined bunch of gangsters – the kind who had a dozen front row season tickets to the opera. Using loophole in prohibition laws that allowed the manufacture of rubbing alcohol, they paid people all over Little Italy very good money to set up stills in their houses.

In those early days of prohibition, the city was divided into neat lines: The north side was run by, well, the North Siders, led by Dean O’Banion. On the South Side, Johnny Torrio hired some thugs to kill the boss of the area, Big Jim Colosimo, in order to move into the liquor racket. Peace between the two was kept by Mike Merlo, a poltician.

The Gennas were on Torrio’s side, but on the very northern end of it. Having made more liquor than they knew what to do with, they wanted to expand up into O’Banion’s territory, and often told Torrio they’d be only too happy to kill him. Torrio got a taste of O’Banion’s blood after O’Banion double-crossed him in a liqour sale (he told Torrio he wanted out and offered to sell him his business for 500K. He got the money, but the whole thing was a set-up that landed Torrio a short jail term). Two days after Merlo died, a trio led by Mike Genna assassinated O’Banion in his flower shop. The great gang war of the 1920s had begun.

Three of O’Banion’s men (Vincent Drucci, Hymie Weiss, and Bugs Moran, two of whom lived at the Congress Hotel, where Tony Genna also lived in a $100 a night suite) attacked and nearly killed Torrio (after the trio pumped his guts full of lead, Moran fired right at his head point blank – but was out of bullets). Torrio wisely got the hell out of Chicago and turned his operation over to Al Capone, his young lieutenant.

Things were just about to get rough for the Genna brothers…. Three of the brothers would be killed before 1926 was out, and the rest were out of business.

11 thoughts on “A Forgotten Gang: The Genna Brothers (part 1)”