One of the most bizarre famous social clubs in the history of the city was The Whitechapel Club, a morbid club for news reporters whose headquarters featured body parts, a coffin, and all sorts of grisley stuff. 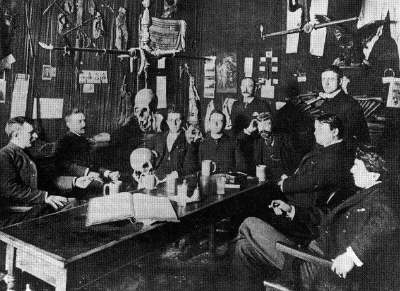 In 1890, the Tribune ran a GREAT article called “A Night at the Whitechapel Club” that I’ll be serializing here. It came JUST after Chicago had been announced as the location of the World’s Fair.

How Convival Spirits Drink Their Punch In Honor of Their Patron Saint, Jack the Ripper
– Emblems of Wickedness Thrown From the Walls – Startling Roll-Call of the Members –
Proceedings Cut Short Promptly at 5 a.m.

Within the last few days the Whitechapel Club of Chicago has drawn itself the eye of the Nation. Chauncey M. Depew and Roswell P. Flower have wired it weird congratutions over the location of the world’s fair.
I.
And this is the Whitechapel Club!
One turns out of Clark street into a misty, muddy alley; barrels and rubbish clutter the way; then there comes LaSalle Street.
One blunders over the car tracks and dodges flickering cabs and finds one’s self once more in the dark and dingy alley.
A few steps more; this is Calhoun place. On one side is the basement den where the messengers do congregate; on the other shine the lights that “burn o’ nights” over the Whitechapel Club.
One might almost imagine one were in the dark depths of Berner’s court in London, where in months gone by Jack the Ripper carries on his investigations in the phsyological vein.
But outside it is all imagination; inside it is all reality.
For inside one finds all the weird horros that took their birth in the odorous slums of Whitechapel.
Skulls of murderers lie on the table, and out of them “Whitechapelians” drink buoyant punches, as Byron did of old. And, bu the way, Byron was the first and charter member of the club. In a spiritual sense, of course, for Byron was nothing but spirituous.
And so one enters the swinging, glazed doors of The Whitechapel Club…

2 thoughts on “A Night in the Whitechapel Club – Part 1”