From an 1896 issue o The Oologist magazine:

Benjamin Pretzel? I wonder how many of these the guy (who lived a couple blocks from the place) sold? Was there any way to distinguish the packets from any other packet of abspestos? Are any still out there today?

I’ve occasionally had a chance to get things along this line, but I don’t want anything Holmes ever owned in my house. I have some “collector’s items,” including a clothes hanger Bob Dylan bent up, and a strand of Charles Dickens’ hair, a doorknob from the hotel Capone used as his headquarters, and some bricks from death alley, but I draw the line at serial killer relics.

In similar news, I recently found an article from 1895, during excavations of the castle, that had another explanation for the bones found there: they were not murder victims, but remants of a cemetery that had been on Wallace after the Civil War, but was built over. This is not impossible; Chicago is certainly in the habit of building over cemeteries without moving the bodies first. But to the best of my knowledge, the “castle” was not built over an old graveyard.

Here’s something I’d never seen before yesteray: Holmes without his hat on. 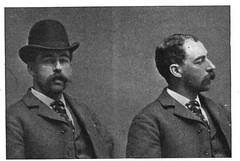 One thought on “An H.H. Holmes Collector’s Item”