Resurrection Mary isn’t the only woman in white reported along Archer Avenue. Indeed, as you can hear in our podcast, similar ghosts have been reported around the vicinity at various times, including Ray’s story about a ghost at Fairmount Cemetery.

Long before stories of Mary began to circulate, the original vanishing hitch hiker was the raven-haired woman in white and her horse-drawn carriage that were seen around St. James of the Sag, further down Archer through the woods beyond Resurrection. The cemetery there long had an unofficial (but widely understood) policy of allowing anyone to bury a body for free, and throughout the 1800s, stories of drunken burials that turned into drunken brawls were common. Unmarked graves dot the sloping graveyard (which climbs up a hill towards the church – it’s awfully spooky on a foggy night!).

In 1897, a pair of Chicago musicians hired to play at a dance (dance halls do tend to figure into these stories, don’t they?) awoke in the night to sound of galloping horses. Frightening, they looked out their windows (which afforded a view of the cemetery) and saw a woman in white with long black hair wandering around the area, moving without any apparent effort. A team of snow-white horses with “electric lights” on their heads approached, pulling a carriage behind them. The woman raised her arms, the lowered them, and sank into the ground. As she vanished, the horses did, too. The tribune, which ran the story with testimony from locals attesting to the sobriety of the musicians, ran this wonderful picture: 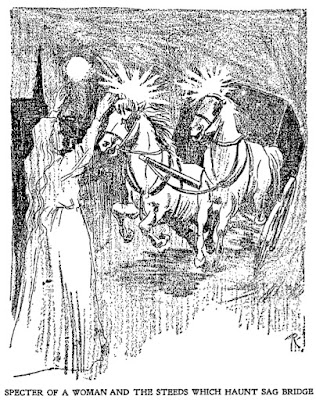 Traditionally, this has been said to be the ghost of a woman who died in a carriage accident while in the process of eloping with her lover. I’m not sure if anyone’s noted that this all took place roughly a week after the Tribune ran a BIG article on the cemetery and it’s “open door” policy for free burials.
It’s also worth noting that only three monts later, in December of 1897, the New York Times ran an article stating that the skeletons of nine Indians had been dug up (in addition to several that had been dug up some years before, leading to a rash of ghost sightings). Most of the skeletons were re-buried, but others were taken to the Field Museum.  The owners of the property where the bones were found said their house was haunted and that they would have to move.
The connections between this story and two other Archer Avenue legends – Resurrection Mary and the ghostly horse-drawn hearse that is reported now and then, are hard to ignore (not to mention the sobbing woman of Archer Woods, the Maple Lake ghosts, and so many others). Is it really all a part of the same ghost story, just evolving over time, or are there several ghosts along that spooky stretch of road?
(Visited 339 times, 1 visits today)