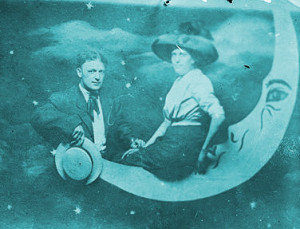 In 1908, a woman named Frances Thompson was found strangled to death and robbed in a home on the 1200 block of South Michigan. A man named Luman Mann was tried for her murder and acquitted. During the whole ordeal, Mann’s father, Orville, received an anonymous note stating that he could solve the mystery if he went to Riverview, the north side amusement park, and find a clown with a wooden leg.

Mr. Mann doesn’t seemed to have followed up on the clue at the time, but four years later just such a clown would be arrested for another murder in Chicago, in a story that made from page news before being completely forgotten.

In early October, 1912, an heiress named Sophie Singer came to Chicago with her fiance, Will Worthen. They were met at the station by a “Mrs. Conway” who suggested that they all get a flat together instead of a hotel. This “Mrs. Conway” was really Mrs. Louisa Cramer, the wife of Charles N. Cramer (alias Charles Kramer, alias Charles Conway). The two were in the circus profession; Mrs. Conway was a lion tamer who also called herself The Queen of Burlesque and Mr. Cramer doubled as Conway the Clown,  working as a parachute performer and as the “comet” in a high dive act. Some time before, a circus accident had cost him the portion of one of his legs, below the knee, and he walked with a self-built wooden foot.

The three set up housekeeping in a little flat on the 2900 block of S. Indiana Ave, eventually joined by Mr. Cramer (who the couple, as well as the papers, would usually called “Charles Conway.”) The circus couple had no money, except what their new friends gave them. And they seem to have given them plenty. The Conways, it seems, were the sort of mooches who made people feel happy to pay.

Until Miss Singer started thinking it was time to go back to Baltimore. At that point, Worhten later said, “they seemed to hate us all at once.”  The unlikely foursome moved to another house a few blocks south. Worthen went out gambling (he had a system where he had friends at the races telephoning in results to him before they could be telegraphed to the bookies), and came to the new rooming house  to find the keyhole stuffed. Breaking down the door, he found Sophie’s feet sticking out from under the bed. She had been strangled to death; her hands were tied with clothes line and Cramer’s handkerchief was shoved so deep into her throat that police needed pincers to remove it. Her jewelry had been stolen.

After a nationwide dragnet, the Cramers were caught in Lima, Ohio, near where Charles had been born in 1886. Mrs. Cramer quickly confessed, and when he learned of the confession, Charles did, too, though he insisted that his wife had nothing to do with the murder, though he said it had been in self defense, following a quarell after Miss Singer had suggested that Mrs. Cramer should be try prostitution.

In the midst of confessing, he did a bit of clowning with reporters and police. “Say, Captain?” he asked. “Do you know that in this case you can’t hang a man with a wooden leg?” When the Captain said he’d never heard of a law like that, Cramer said “You have to use a rope!”  Har de har har.

“How did you hurt your foot?” one reporter asked. “A steamboat ran over it,” Cramer joked. 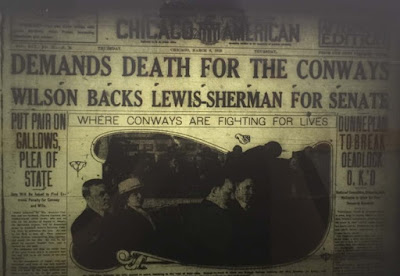 The trial in March, 1913, made front page news, even in the shadow of Woodrow Wilson’s
inauguration as president. Both Mr. and Mrs. Cramer recanted their confession, stating that the police had used “third degree” methods to get them, denying them food and medicine in their separate cells. The judge did eventually throw out the confessions, but the jury found the Cramers guilty. Charles was sentenced to life in one prison, and Louisa was sentenced to fourteen years in another (she served about a year). Charles only narrowly avoided the gallows.

As he was led away, he vowed that he would “get out of this,” and twelve years later he made good on his promise. In 1925, while serving on the “honor farm” at Joliet, Cramer escaped from prison. He last appears in the news in 1932, when his mother tried to get a judge to declare him dead so that she could collect his life insurance. According to articles at the time, he had last been seen in Toledo in 1929.  The world never learned what had really become of the Conway, the murderous one-legged clown, after his escape….

This is one of those stories that I find myself in disbelief over. A one-legged clown was convicted of murder in Chicago, escaped from prison, and was never caught. And, outside of some brief mentions in papers between 1914 and 1932, no one seems to have written about it at all ever since!

I can’t help but think of the peg-legged ghost that is said to haunt the Congress Hotel….