It’s that time of the year when the story of the Hull House Devil Baby is being retold again and again – often repeated as fact, just as it was in 1913. That was the year that rumors that a “devil baby” had been born on the West Side and dropped off at Hull House first circulated through the midwest, attracting thousands to the door step, where they begged to see the deformed baby that was said to have bright red scaly skin, horns, hooves, and a tail. It was said that it was already fluent (and profane) in English, Latin, and Italian, and its birth was the result of an expectant father saying he would rather have the devil than another girl, or than having a picture of the Virgin Mary in the house (or any number of other blasphemies, depending on who was telling the story).

Jane Addams, the founder of Hull House, said that the story could have been a thousand years old (except for some variations involving a red automobile). In fact, the sensation of wild rumors of a demon child attracting throngs of curious onlookers was not unique to Hull House. It was a story that came up now and then – one of the great urban legends of the 19th century. Variations probably go back centuries, but around the late 19th century, there were actually a number of other cases when rumors of a devil baby created a sensation.

In 1888, a rumor that a devil baby had been born in Newburg, a Cleveland suburb, was published in the Cleveland Plain Dealer.  Here’s a picture published in their 3/25/1888 issue – according to later issues, eyewitnesses said it was quite accurate: 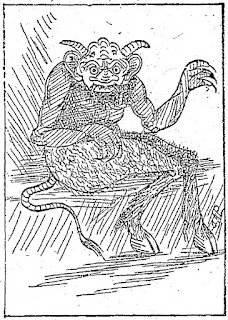 The paper remarked that the widespread rumor had been good for the Newburg railway, as a constant stream of people had come looking for it. A “freak man” from Detroit was running all over town offering $10,000 for the use of the baby for four months. Rumor had it that the “devil kid” juggled hot coals for fun and that he ate a box of matches every day.

The Plain Dealer actually insisted that the story was real for a whilel, and even published an interview with the midwife who delivered it, though they declined to print the correct address to protect the family. They were, in fact, the outlet that broke the story. Their March 22, 1888 edition announced “Satan Incarnate: A Demonical Monstrosity in a Polish Family.” It described the kid as being bright red, with hair all over its body (like a satyr), horns, claws, and hooves, said and was known to use profane language to ministers (having been born able to talk). The paper speculated that the baby had been born as a result of the mother having seen a play about the devil, and cited a similar case when a man became enraged when his wife became pregnant and beat her about the head with a dead crow, causing the baby to be born with a crow’s head.  This all makes more sense when you realize that this was all written in the week leading up to April Fool’s Day.

But thousands believed the story and flocked to Newburg hoping for a look at the thing, and the paper kept the story alive. Other papers – which were initially curious enough to send reporters to Newburg, heaped scorn all over the Plain Dealer and called them all sorts of names.

In July, the Plain Dealer – still saying the story was real – announced that the baby had died in May, and that its embalmed corpse would soon be on display in a dime museum. The “baby” on display was actually made of paper mache.

The Plain Dealer seems to have had a knack for such pranks – in 1890, they printed an April Fool’s story that an ancient underground city had been found in a local cavern. Thousands came to look, and other papers actually repeated the story as fact, and the Erie Dispatch advised them to check the date and remember the Plain Dealer’s “yarn” about the devil kid. A painting of it – probably a more detailed version of the drawing above – was a huge hit in a local dime museum.  Does anyone know whatever happened to the painting?

Cleveland was not the only place where a story similar to the one at Hull House sprang up. A few years later, a brief sensation was caused by rumors that such a child was on display at a Museum in Washington, DC.

In 1891, a Minnesota mother was said to have caused a sensation by giving birth to a devil baby (the sight of which caused her to go insane). In a story almost identical to a common variation of the Hull House tale, the baby was said to have been born shortly after the mother turned a Bible salesman away, stating that she would rather have a devil in her house than a Bible. The salesman raised his arms and said “then I will send a devil to you!”

A similar baby was said to have been born on Elizabeth Street in New York in 1902. The actual address of the house was published, and police reported that it was no good telling the curious that there was no devil baby (or any other baby, for that matter) in the house. Several curiosity seekers were arrested and fined $5.

In 1904, a case was reported in Detroit. This one was said to be pitch black, hair, with horns, and a strong appetite for coal. According to rumor, when the family took the baby to be baptized, it escaped from the cradle and was found hiding in the stove. When investigators failed to find the baby, the superstitious locals insisted that it had simply disappeared.

In 1907, a story went around Kentucky that the widow of a preacher had burned a Bible on her husband’s grave and given birth to a devil baby three days later. The baby told her he would torment her for seven years, and after that she would die and go to hell.  One paper said “considering such dire threats highly reprehensible, especially from someone so young,” the mother tied a rock around it and threw it in the water – but it swam right back.

By 1912, the year before the story hit Hull House, an Illinois paper was calling the story a “classic romance” and saying that a new version was cabled over from Europe every five years or so.

The stories certainly did catch on in those days – and still do. Most people snicker when I tell the story of the Hull House devil baby cursing a priest out, but some people really do still believe it, no matter what I tell them.

DEVIL BABIES
Devil baby stories have been told for years—stories of infants born with horns, hooves, and claws . . . and a habit of using profane language with ministers. Join paranormal authority Adam Selzer as he investigates the legendary Devil Baby of Chicago’s Hull House, the famous Jersey Devil, and the satanic baby reported by the