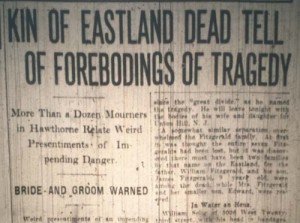 This week marks the 100th anniversary of the Eastland disaster of 1915; we’re featuring posts on it all week

Even with my general skepticism about paranormal stories, one belief – or half belief- that’s stayed with me is the idea that when people are about to die, a part of them knows it. Think of all the “last speeches” people made that seemed eerie later on.

My upcoming Ghosts of Lincoln book documents several things Lincoln said or did in the days before his death that seemed spooky later on, ranging from simply saying “Good-bye” in stead of “Good-night” to an aid to eyewitness accounts of him lingering over lines about the assassinated King Duncan while reading aloud from Macbeth. Only one was written down before his death, but several had many extremely high-level sources. It’s very difficult to read about Lincoln’s last few days and not get the sense that on some level, he knew the end was coming.

A similar thing happens with disasters. There are all sorts of stories about people having premonitions before getting aboard the Titanic, before 9/11, and so on. Most of them were not written down until well after the fact, so they don’t necessarily hold up as “evidence,” but the stories still make for fascinating reading. The Eastland disaster, in which an oversold boat capsized in the Chicago River and claimed the lives of 844 people, inspired premonition stories that spread like wildfire through the city in the wake of the disaster.

Two days after the ship capsized, the Chicago Evening Post told the tale of Herman Bottin, a mourner who had come from Iowa to search the morgues for the body of his daughter, Louisa Jahnke, who had been married less than a month before (her husband, Paul, also perished). With him was the girl’s uncle, Mr. Herman Schwandt, who said, “I had a premonition that something was going to happen to Mary and her husband. It was a sort of a dream. It woke me up Friday night.”

According to a 7/17/1915 Tribune article (which was also printed in the Post),  Paul and Louisa Jahnke had had similar dreams of their own, and were  so sure they would die that they made out their wills just before the trip. The two lived at 4817 W. 22nd Place, and their landlady, a Mrs. Altman, said “Both had a dream of the boat. Now they are dead. They were married just six weeks. Mr. and Mrs. Paul Jahnke, and they were so happy. Friday night when Mrs. Jahnke was fussing over lunch, she stopped and expressed a fear that something would happen to the boat. Later Mr. Jahnke rang my bell. ‘Here is my key and the $50 for mother if we don’t come back from the trip,’  he said.”

Their relatives, upon entering the apartment after the disaster, found a letter and a will on the dresser.

The Jahnke’s apparent premonition was, by far, the best documented premonition story. But theirs was not the only one – papers said that stories of eerie predictions were on everyone’s lips, and one paper estimated that at least a dozen similar stories were in circulation. The same Trib/Post article that told the Jahnke’s story also said that Josie Markowska, age 18 of South Sacremento Avenue,  had spoken of a premonition. According to her friend Helen: “Josie told my mother she felt something awful was going to happen and that she did not want to go to the picnic. My mother laughingly told her to go on and have a good time and warned her not to think of disaster else she might bring it on the boat. Now, Josie is dead. She was the only support of her mother and four small brothers and sisters. Mrs. Markowska…dreamed that Josie walked into the room, but it was a neighbor asking for a nightrobe for the body.”

Some of the premonitions only came out as casual mentions, such as the case of 19 year old Mamie Ponicki, whose obituary mentioned that on her way out the door, she said, “Good-bye, mother. I may never see you again.”

Mr. Tony Biehl was in Oklahoma leading an archestra and told the Tulsa World that as soon as he heard of the tragedy, he had a presentiment that he would “learn something of it concerning me more directly.” Sure enough, he found the name of a cousin of his who lived in Chicago among the names of the dead. 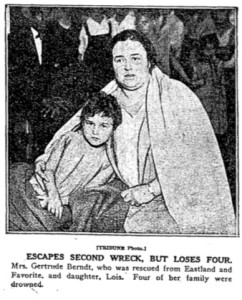 Twelve years later, an Eastland survivor named Gertrude Bendt was about to board a ship called The Favorite with her family at Lincoln Park for a two mile trek down to what is now Navy Pier. She told the Evansville Courier that she hadn’t liked the look of the ship, and suggested waiting for a larger one. Her family, who seem rather insenstive to the natural fears of someone who survived the Eastland, laughed and called her a “crepehanger.” She reluctantly boarded. The weather was fine when everyone boarded, but when a sudden storm hit and the ship began to tip to one side, Mrs. Bendt ran to the opposite side, calling the others to join her. They refused. The Favorite capsized half a mile off the coast of the North Avenue beach, taking the lives of twenty-seven, including four members of Mrs. Bendt’s family. Many papers erroneously stated that it had been the anniversary of the Eastland.

Of course, Mrs. Bendt’s premonition seems far more like sensible nervousness than anything paranormal, and so did many of the premonitions and predictions made about the Eastland in 1915. Such was the case of Martin Collins, a Northwestern student, and Chester Adams, two employees who told the Chicago Examiner that they’d quit working on the ship only days before the wreck because the ship scared them. Adams, who worked as a watchman, said, “We all knew that the Eastland was a freak and unsafe. I quit the boat because I was afraid of the boat from the first night I was on her. Besides the danger of the boat the sanitary conditions were awful.” William Katham, another former employee, told a similar story to the Rockford Morning Star: “Another captain said that summer that the Eastland would tip over some day.”

Similarly, my own fears that people are going to get hurt at the new riverwalk at the Eastland site is no psychic hunch – I’ve come so close to tumbling down the steep stairs or into the water myself in the times I’ve been there that I’m avoiding taking tour groups to the place. But if someone does get hurt there, this post will seem like a grim premonition…