Yes, we do occasionally have weird, ghostly things happen on our tours!

The “gunshot” noise we heard a few weeks ago in the Florentine Ballroom came from the service hallway outside of the ballroom. But on Friday night, October 10, we were hearing several loud noises in there – some were big “boom” noises, others sounded like footsteps above the ceiling; it sounded as though someone were walking around on the ceiling dropping heavy objects. It’s not exactly the same as the “gunshot,” but it’s a pretty good example of what’s been happening in there. You can hear an example in this video clip – listen to the people think that Hector, the driver, must be playing a prank. The “boom” comes about six seconds in:

Even after talking to security, who said the surrounding area was deserted, I assumed that there must be someone on the floor above the place doing construction, or that perhaps there was some sort of issue with the pipes. Water heaters and furnaces can make noises like that, and I sort of thought something like that must be above the room (though the furnace is actually a couple of floors below it). The next night, though, one of the guards took us up to see exactly what’s above the Florentine Room. Here’s what’s on the other side of the arched ceiling: 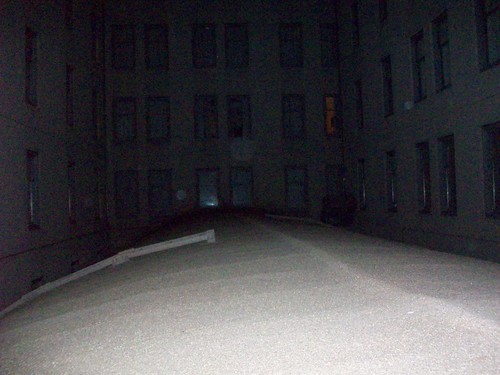 We’ll ignore the “orbs” and focus on the fact that it’s an airshaft – there’s nothing above the ballroom but sky. We went back down to the ballroom so the guard could bang around on it, making as much racket as possible. His best efforts sounded like dull footsteps from the ballroom – nothing like what was heard the night before, or on the night of the “gunshot.” The pipe-like things visible are actually ladder-like things; you can see in the video where there used to be a hatch in the ceiling (at least, we think that’s what it was – it’s not a door at all now).

So, well, it’s a mystery. This isn’t exactly the same sound I heard the night we heard a “gunshot” noise in the hall – there were actually a dozen or so noises this particular night of varying intensity. Some sounded like footsteps, some sounded like someone dropping something really heavy onto the ceiling – but we now know that dropping something heavy on the ceiling wouldn’t make anything LIKE this noise. I never say flat out that something is actually “paranormal” in origin, but no theory explaining the noises has really held up.

NOTE: In the video, I mention that, according to security, the piano in the room has been known to play itself. Only one of the guards ever claims to have seen that happen, but almost all of them have heard music coming from the room in the middle of the night.

One thought on “Florentine Room “gunshot” VIDEO and investigation”