Only hours from the anniversary of the Iroquois Theatre disaster (which I just posted about a few days back), Brandon L got this nifty shot on one of my tours. He says there was no one there when he took the picture, and the person who was standing next to him said so, too; I wasn’t watching at the time so I can’t say for sure. But Brandon showed it to me at the next stop and had emailed it to me before the tour ended (probably setting a new record!) 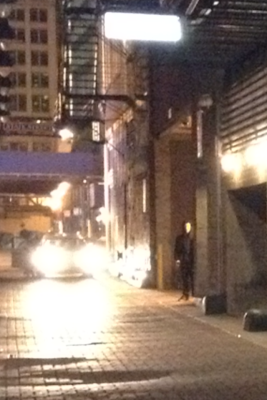 Just looking at it, my first instinct would be to say the guy was photo-shopped in, but given the circumstances under which it was taken and sent, I don’t see how he could have done it without leaving any traces (trying to do photoshopping on a phone with your finger while on a bumpy bus ride would be a unique and impressive feat by itself).
As always, I’m not saying that this is a real ghost – I can think of a few possible explanations (though they may not be the RIGHT explanation). It’s a pretty cool shot either way, and kids go nuts when I tell them about it – the “man in a black suit with no face” thing is a description of Slenderman, a ghost story that every kid seems to know about these days.
What do YOU think?
Update: a security guard who works in one of the buildings opening to the alley is fairly sure it’s him in the picture.  But the guard in question has a beard, so… 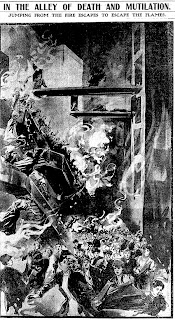 Of all the stops on my tours over the years, this is the one I’ve used most frequently. I have several routes that I switch back and forth between, and a repertoire of plenty of different stops. But this one has been on every route – I can’t think of any period when I was skipping it.
(Visited 409 times, 1 visits today)