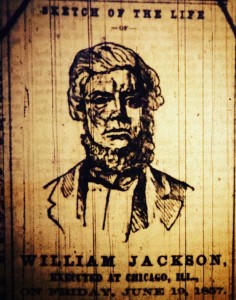 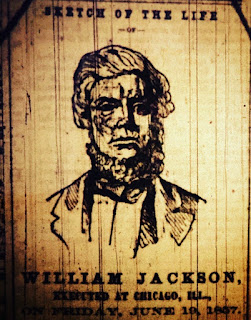 Chicago has approximately 70 abandoned cemeteries that we know of, the best-known of which is probably the old City Cemetery, where Lincoln Park is now. It wasn’t the largest of them (there were later burial grounds at Dunning and on the southwest side that have FAR more unmarked graves still beneath the ground), but it was far from the smallest. Most of them are just old family plots.

When I was preparing notes for my “Dark Side of Taylor Street Tour” this weekend,  I realized there might just be a particularly small one – just a body or two – at Taylor and Ashland.
On two occasions, in 1857 and 1858, public hangings were held right in the middle of Ashland (then known as Reuben), between Polk and Taylor.  (the only previous hanging had been down near where Chinatown is now, back in 1840).  At the time, Chicago had grown to a city of around 100,000 people, but Ashland was still an area that a correspondent for a Boston paper called “an open prairie.”
Hangings were still a public affair in those days, and stories you hear about them being a popular spectacle are not exaggerated. An crowd variably estimated as being from 5,000 to 25,000 people were onhand for the 1857 hanging of William Jackson including – newspapers were distressed to note – countless women and children. Fewer were present when Albert Staub was executed the next year, largely because of drenching rain, but several thousand still braved the weather.  The Tribune wrote that “As soon as the carriages reached the street, the dragoons (of local militia) formed in the front and rear, and the procession proceeded to the place of execution, followed by thousands of men and boys who had stood for hours in a drenching rain, determined to gratify their depraved tastes by witnessing the death of a fellow creature….Despite the rain and ankle-deep mud, the crowd followed the procession as best they could, here and there going across-lots, and often wading through ponds of water nearly knee-deep.”
It’s in the accounts of Jackson’s execution that I noticed something odd: “Nothing occurred at the gallows to interrupt the carrying out of the sentence, and everything was done orderly and decently. A short time after the execution a temporary platform under the gallows gave way, by reason of too many persons climbing upon it, but no one was injured…..after Jackson had hung…. Dr. Cheney, county physician, pronounced him dead, and the body was cut down, placed in a neat coffin, and buried by Coroner Hansen.”
In that last sentence, I would have expected there to be a line about the body either being conveyed to City Cemetery, or turned over to a medical school. The way it’s written, it appears as though Jackson was buried right there on the site! And no account I had of the 1858 hanging of Alfred Staub on the same site made mention of what what was done with the body, either.
And that’s unusual.  With almost every other execution from those days, something is known about what happened to the body. Papers almost always mentioned it.  We know that  after the previous hanging, in 1840, the body was given to Drs. Boone and Dyer to dissect (incidentally, Dr. Dyer is the source connecting to Chicago to what we now call “vampirism.”). After Jackson and Staub, the hangings were moved to the prison; after the first hanging there, in 1859, the body was given over to the condemned man’s sister. At the next one after that, in 1865, the two bodies were brought to the receiving vault at City Cemetery before being transferred to Calvary Cemetery, where a local priest had them buried at his own expense. And the time after that, in 1873, the body was taken to Graceland.
Burying a body right in the field would still be highly unusual (and I assume that a body buried like that would be dug up by “resurrection men” and on the slab at Rush Medical College in no time). But 1850s Chicago was a strange place, still in transition between being a frontier town and a major city. The transition happened remarkably rapidly, but how many of the city-dwellers of 1857 were still pioneers in their minds? I do still find references to Chicagoans digging graves in their gardens in the 1850s.

The last time a hanging had taken place before Jackson, way back in 1840, City Cemetery hadn’t even been formed yet. And accounts of the 1840 hanging really do sound like something from the Wild West. The body was dropped into a farm wagon (sloppily; it fell over the side), and the rope was cut by a local jack-of-all-trades who was known around time by an epithet no longer in polite usage (“N-word George”). If there hadn’t been a medical school around, they possibly WOULD have just buried it near the gallows.

In the microfilm room the day after the tour, I managed to clear it up. The Chicago Daily Democratic Press gave a very thorough account of Jackson’s life, and of his execution (as well as providing the drawing above, which I was stunned to see; 1857 newspaper seldom had drawings of current events). There, in their account, is the detail others ommitted: “the remains of the criminal were lowered into a neat plain coffin and placed in the black carry-all and thence taken to the cemetery, where the earth closed over the unfortunate and erring man.”
So, Jackson was buried in a cemetery, not in the middle of Ashland, after all. Presumably this was City Cemetery, where Lincoln Park is now, and Jackson was mostly likely buried in the Potter’s Field, where the baseball fields are today. Chances are that he was never moved, unless the grave robbers got him. Which is entirely possibly.
I still can’t find an account of Alfred Staub’s execution that mentions what was done with the body. After he was taken down and placed in a coffin, the hood was removed so that the crowd could gather around and have a look at his face, a display that sickened every reporter on the scene enough to make them leave before the body was disposed of.  But if Jackson was taken to the cemetery, it’s to be assumed that Staub was, too.
The reporters present seem to have universally disdained the spectacle and the crowd, with one even publicly refuting the common notion that children seeing a criminal hanged would deter them from crime. Indeed, he insisted, it probably just made things worse: “whatever may be thought of the necessity of capital punishment, no one who witness the execution of Albert Staub yesterday could have failed to feel that such exhibitions are brutalizing, and have a tendency to create more crimes than they prevent.”
As large as the crowd was, the majority of the public (or at least the majority of the government) seemed to be on the reporters’ side. Shortly after the Staub execution, public hangings were outlawed in the state of Illinois, and henceforth they were carried out in private, first in the old courthouse and then in the prison at Illinois and Dearborn, where they continued until 1927.

The Mysterious Chicago “Hangings in Chicago” tour tells the stories of crimes that led men to the gallows (or very nearly did), plus stories of what happened there. It’s a grim look at a custom – a relic of barbarianism really – that was once very much a part of the fabric of the city, but which has now been done away with (and good riddance, if you ask me).
(Visited 436 times, 1 visits today)