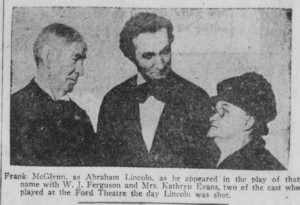 On a recent walk through Rosehill Cemetery, looking for new stories to tell on tours, I came upon the gravestone of Albert H. Dainty, whose epitaph read “Until the day breaks and the shadows flee.” This was a line from The Song of Solomon in the Bible. Translations vary, but the full line is something like “Until the day breaks and the shadows flee, turn to me, my beloved, and be like a wild elk among the rugged hills.” Go, Albert H. Dainty, go!

Some research showed that this epitaph would have certainly been chosen by his second wife; his first, Laura, left him to go on the stage, ignoring his pleas to come home for a decade before he finally obtained a divorce. She was a fairly well-known elocutionist in her day, and turned out to have connections to any number of other people in Rosehill (though she herself is in Forest Home). Later in life, she was very active in the Hull House theater, where she directed a performance of a play called Hazel Kirk in 1917 as benefit to raise money to get a retired actress named Kathryn Evans into the Episcopalian Home.

I was delighted to find the connection to Evans, whose nondescript gravestone on the north side of the cemetery is one of Rosehill’s many little-known treasures.

Evans was an actress, and a fairly popular one in her day, though what earned her a place in history was her role as Mrs. Sharpe, a housekeeper, who had the first line in a comedy she later said “Wouldn’t be considered very funny today.” That comedy was Our American Cousin, and Ms. Evans appeared in it at Ford’s Theater the night Lincoln was assassinated there in 1865.

The details in the story she told of that night – over and over for the rest of her life – seem to change a bit in the telling, but she gave a particularly vivid description to a Chicago Daily Inter-Ocean reporter in 1914. “I was in the green room,’ she recalled, “chatting with Maggie Gourlay, the ‘Skillet’ of the play, and waiting for my cue, when I heard the shot ring out…. I knew when I heard the shot that it couldn’t be a part of the play…. A moment before young Booth had leaped to the stage. I heard someone shout ‘Stop that man!'”… I looked up and saw Lincoln unconscious, his head drooping on his breast, his eyes closed, but with a smile still on his face.

“After the tragedy I ran upstairs to the dressing-room. The stage was filled with secret service men, who seemed to have gone crazy. They had arrested ‘Peanut Johnnie’ (the peanut vendor who held Booth’s horse) as an accomplice – poor ‘Peanut,’ who did nothing more than hold Booth’s horse. They were looking for Ned Spangler, our stage carpenter, who had innocently held the door open for the assassin. My husband was also under suspicion, as he had had a drink with Booth in George Harry’s cafe next door before the play began.”

Evans went to a dressing room, where she wiped the makeup off her face, certain that any second a detective would knock on the door to arrest her, too. Eventually the property manager assured her that she was safe, and she walked into the empty theatre, which wouldn’t see another audience in her lifetime. Her husband was arrested, but released. The property manager was held in the federal jail in the capitol building for a time, and his frantic wife lived with Evans for a bit. In the heady hours after the assassination and Booth’s seemingly easy escape, everyone in the theater was under suspicion.

She had worked with Booth a little bit before, and thought him the perfect gentleman. She had even seen him that day, and said that he betrayed no nervousness regarding what he was about to do. “My last glimpse of him,” she said, “was as he stood with his arms outstretched at the entrance to the theater, facing the stage. We all liked him.”

“It was an unhappy season for us,” she recalled. “The theater was closed, and we, who had been favorites a week before, were out of work. We were all more or less under suspicion because Booth was an actor… my husband died shortly after. It was a sad year for me.”

Years later, visiting Washington for the first time since 1865, she visited the federal prison and was appalled to see a guard prodding an elderly prisoner with a bayonet. She loudly protested, until the guard said the prisoner, was “Still a rebel at heart; he told me he was glad the blankety-blank old rail splitter had been killed. “Give him an extra prod for me, then,” Evans said.

Evans remained an actress for years, eventually retiring in Chicago. In 1920, a play about Lincoln was performed at the Blackstone Theatre (now the Merle Norman), and Evans viewed the play from a box, where she sat alongside Sgt. A.W. Boggs, who’d been in the audience at Ford’s Theatre that night, and W.J. Ferguson, who’d been in the cast with her that night. They hadn’t seen each other since, though Ferguson was still a working actor; he was currently appearing in the The Little Whopper at the Studebaker, and had recently played Lincoln in a silent film.

I’m indebted to Dave Taylor and Kate Ramirez, Booth family scholars who told me about Evans; we located her grave at Rosehill over the summer when they came through town on their “Boothie Road Trip.” Check out his site boothiebarn.com!