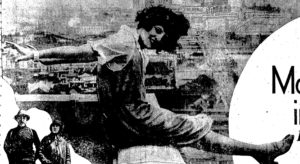 Since the story of Lillian Collier, the flapper who seemed to disappear from the record in 1924, figures heavily into the rough draft of my new novel, I doubled my efforts to find out the rest of her story – and I’m pleased to say that I have finally solved the mystery of what happened to her!

Just to refresh your memory, Lillian was the 20 year old owner of The Wind Blew Inn, an early 20s bohemian dive at Michigan and Ohio, where the Eddie Bauer is now. She was arrested for hosting “petting parties” and playing loud “syncopated ‘blues’ piano” music, and either she or her “aid,” Virginia Harrison, told the judge “there is no snugglepupping at the Wind Blew Inn.” She covered the nude statues in the place with overalls and told reporters that she was trying to convert Chicagoans to the gospel of high art.  She and Virginia were sentenced to read a book of fairy tales to cure them of their bohemian ideals (in a case that should have become a landmark event in the early history of post-suffrage feminism).

A couple of years later Lillian was interviewed for a widely-circulated article entitled Is Today’s Girl Becoming a Savage? in which she defended flappers as vanguards of a new era of freedom and opportunity for women.  After that, though, she simply vanished from the record. It was only recently that I found an article on microfiche that gave her mother’s name, which led to a census form and some other records, though still nothing from after 1924. 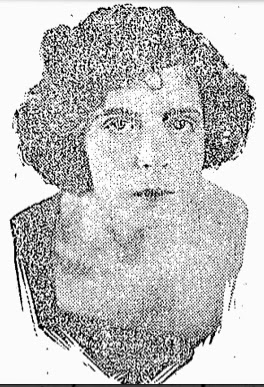 Recently, I ran across what may have been her father’s World War 2 draft card – a guy with her father’s name (Meyer Lieberman) and statistics (place and date of birth, anyway), matching up to his.  There were a lot of people named Meyer Lieberman, so you have to be careful.

His closest contact info was one Mrs. Lillian Gerard. In the 1930 census, Lillian and Franklin Gerard were in L.A. with Lillan’s mother, who was listed as Natalie Bensonson. Bensonson, I knew from other records, was Lillian Collier’s mother’s maiden name. Her name was Nellie, not Natalie, but mistakes like that are common in the census, and since Meyer and Nellie were divorced by 1930, it’s possible she had gone back to her maiden name.

On the 1940 census, Lillian Gerard was going by “Lilli” and had a baby son named Frank Gerard Jr. The form said she was self-employed as a writer.

The mother’s maiden name was a strong clue, and I’d suspected that she ended up in Los Angeles (there was a news item saying a woman named Lillian Collier was going to be in a Chaplin film). Looking for info on a writer named Lillian Gerard broke the case wide open, and I was able to put the pieces together.  Lillian Collier became Lillian Gerard at some point in the 1920s, and Lillian Rosenfeld some time later after marrying a Chicago real estate developer.

In the 1930s and 40s, Lillian wrote under the name Nellise Child (“Nellie’s Child”), writing a couple of mystery novels in the 1930s, a couple of more serious novels in the early 1940s, and a handful of plays, including one entitled Weep for the Virgins that was produced on Broadway by the famous Group Theatre collective (and listed as a play young Marilyn Monroe is known to have studied).   She’s also contributed a chapter to 1947 book on Chicago murders – she wrote a section called The Almost Indestructible Husband about Mildred Bolton, a now-forgotten woman who killed her husband (a now-forgotten murder that I’ll have to dig up data on!)

When her first “serious” novel came out in the early 40s, she was writing the book while living as a housewife – her husband didn’t want her to work, according to a news article. This arrangement didn’t work out so well for her, and eventually she divorced Frank and ended up back in New York.  Thereafter, her son (writing in the afterward of a new ebook of Weep for the Virgins) remembers that she took him to just about every Broadway show between 1948 and 1962! He remembers running lines from her works in progress with people like Irene Castle.

Articles about her from the 1940s onward mention her having worked in a cannery in Los Angeles, as well as in soda fountain, and she spoke to one reporter about her days a a “girl reporter” in Chicago (I’ve only ever found one of her articles from those days), but none mention her time in the Chicago bohemia scene. Her brief autobiography on the back of her first novel mentions her work for two Chicago papers, as well a stint with Sells-Floto’s Circus, which backs up the occasional early 1920s mentions of her as a circus performer, and firmly establishes that this woman is the same woman who took Chicago by storm in 1922. 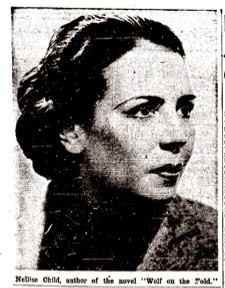 Eventually marrying real estate developer Abner Rosenfeld, she found her way back to Chicago later in life, and seems to have formally changed her name to Nellise at one point. She was living near Loyola when she passed away in 1981 at the age of 79. Her obituary gives her name was “Nellise Rosenfeld,” and she was interred at Shalome Memorial Park. She was still a member of the Dramatists’ Guild, as well as the American Jewish Congress, and a couple of Zionist organizations.

She achieved enough note to have a French wikipedia entry that doesn’t mention “Collie” or “Collier” as a last name (she was only married to Herbert Collie for a very short time when she was just a teenager, from what I can tell). She seems to have spoken very little about her time in Chicago; her son didn’t even know about it when I tracked him down!

So, I’m secure in saying that we’ve found out what happened to Lillian Collier, but this is just the beginning. I may be working with her son now to get more of her works back into print…