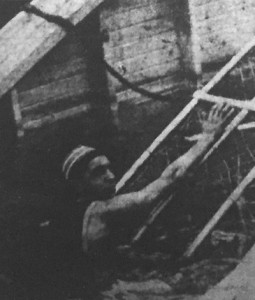 More Eastland Disaster footage has been found in a Pathe newsreel digitized by a British firm. This is far more graphic than the previous footage, showing a body being removed from the hull of the capsized ship.

Again, tracing it back to the known footage is tricky. Did Pathe have a cameraman on the scene, or did they buy footage from one of the others who were known to be there?  Robert Loerzel published several cards from the old film censorship board rejecting Eastland films, and Pathe isn’t one of them. Then again, they clearly didn’t consider every version known. Mutual, for instance, had an Eastland film that wasn’t shown to the censors. So did Paramount Travel Films. And there’s an ad or two out there for theatrical showings of films of the funerals.

But did these companies all make films of their own, or just license footage made by others?

The most common version of the film footage was the one made by the Tribune cameramen, who got about 15 minutes worth of footage that was then exhibited. However, descriptions of it often made a point of saying that nothing particularly “grewsome” (sic) was shown. Then again, some descriptions of the Tribune film do mention bodies being loaded onto wagons, so it’s worth considering that maybe they just had a different idea of what was gruesome (besides a different spelling of the word) at the time.

There are a couple of references in the paper archives – mostly from later on in the saga – mentioning films that do seem to line up exactly with this footage. A few versions of the film were known to be shown in early August (not quite two weeks after the disaster, but already very late in the era when films were shown) refer to the “most complete version” including scenes of the bodies. In no case, though, does either the article or the theatrical ad indicate which version it is, or how it compares to others.

One that was shown at the Dreamland Theatre in Rockford, IL on August 4th spoke of bodies being removed from the hull of the ship, exactly as depicted here. However, neither the brief article nor the ad for the theatre itself specifies which version they’re actually showing, only that it’s the “most complete” version, which would generally connect it to the Tribune version. In all the descriptions of that film, though, it’s said that the dead are only shown covered by blankets. The sort of footage seen in the Pathe reel is the sort of thing you’d think they would have mentioned.

So, once again, there’s no known way to connect this new footage to any of the companies known to be on the scene. My hunch is that it’s an “outtake” that was filmed by the Tribune but sold to Pathe instead of being used in their version of the film.