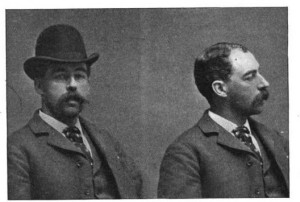 Hey, everybody! I’m pleased to announce that I’ve just signed a contract with Sky Horse to write then a book on H.H. Holmes, as well as a “Mysterious Chicago” book, to be released in late 2016 or early 2017.

I intend for the Holmes book to be the book on the life and career of Holmes, as well as an examination of how the legend grew. I’ve been busily poring over piles and piles of paperwork on him from the legal archives, and tracing every angle of the story. There’s never really been a comprehensive Holmes book that cited and analyzed sources and really worked to separate fact from fiction, and I intend to fill that gap.

Exactly how many photos I can use is still up in the air, but I’ve got a lot of stuff that I’d like to include, like the original architect’s diagram of the “murder castle,” which has never been i circulation. Really, I’ve got so many cool things in the legal archives that I might have to start a whole blog of just Holmes stuff. But I’m also trying to find the best versions of available of the few photos that are in circulation, which is tricky. The originals may not exist anymore in a lot of cases; the ones you see online are generally descended from copies published in 1890s books.

I’ll be working on that all winter, which might cut into posts and podcasts, but I’m also doing the “Mysterious Chicago” book simultaneously. I’ve been digging up things like the Henry Graves probate, which includes the will that provided funds for the “Statue of Death” at Graceland (which is quite a read, let me tell ya).

In the mean time, not as many public tours are being scheduled (hey, it’s the slow season anyway) but private ones are always available.