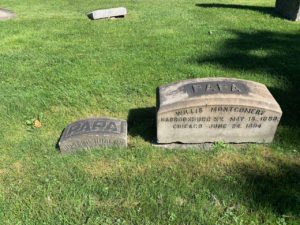 I don’t blame early Americans for their rush to name things after Columbus. In the days after the Revolution, they were eager for some national heroes who weren’t associated with the British, and Columbus fit the bill. But the Columbus obsession was a bug in our nation’s beta release. Most people who named things after the guy didn’t know that the guy could have barely navigated his way out of an outhouse with a map and a flashlight, let alone the atrocities committed on the Indigenous people. It could also be pointed out that we don’t really know what he looked like – that one picture you always see was painted long after he died – so building statues is a crap shoot, anyway. It was a bug in the system, and it’s time to work it out.

But replacing the two Columbus statues in Chicago is just part of it – as we take a long look at who has statues around here and think of new ones to add, one suggestion from me is to commemorate Joseph Henry Hudlun, whose story I came across while writing my Graceland Cemetery book (due next year from Univ. of IL Press).

Joseph was born enslaved in Culpepper, Virginia, as escaped as an adult. There are various accounts of how he managed to escape, but the simplest is that one day he put on a chef’s uniform, got onboard a ship (he’s worked on ships for years), and pretended he was an employee until the shop docked in Illinois, at which point he simply left. He made his way to Chicago, where he almost immediately found employment as the janitor at the Board of Trade. His house at Dearborn and Polk, built in 1857, is sometimes said to be the first frame house built by a black family in Chicago (it was more like “one of the first,” or only counts if you through in certain qualifiers, but still).

Thereafter, Joseph and his wife, Anne, helped others who were escaped from St. Louis – Joseph’s brother would get them across the river to Alton, and Joseph would meet them there and get them to Chicago. After the 1871 fire, their house became a home for refugees; in some accounts she became known as “The Fire Angel.”

He kept his job at the Board of Trade for around 40 years, until his 1894 death, and ammassed about $80,000 by keeping leftover grain samples to sell to feed stores (well over a million in today’s money); upon his death his son took over his job and kept it for nearly another half century.

He has a small marker at Graceland Cemetery, but, interestingly, it’s not in his own plot. His is the next one north, marked by the plain monument base seen in the pic above. Apparently his family planned to build him a regular monument, but never got around to it (his wife and the children who survived him are buried elsewhere).

So Joseph’s marker is in the Gray family plot, next to one similar to his own for a man named Willis Montgomery. A black man born in 1829 in Kentucky (the stone mistakenly says 1859), Montgomery was likely born a slave, and may have been one of the people he helped escape. Even more likely is that plot occupants Martha Stevens and her daughter, Mary Stevens Gray, black women who were born in Missouri long before the Civil War, were some of Joseph’s “passengers” (Martha was even initially buried in Joseph’s plot until the adjacent one was purchased by her son-in-law). The families clearly had SOME connection, though most of it remains pure speculation.

Of course, Joseph is only one of many people who deserve more commemoration than they have. I look forward to lots of new recognition of Chicago’s historical heroes in the coming years!