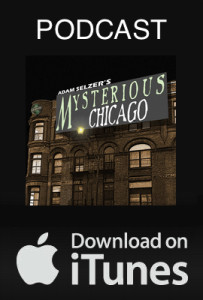 New page, new company, new podcast! Rather than just starting a new series of the old Chicago Unbelievable podcast, I decided to launch a whole new one. This particular version will feature several episodes that are just plain storytelling in addition to episodes like the older ones where we’d take a trip to explore a location, or have a roundtable discussion. This way, I think I can do a lot more of them.

To start off, I thought I’d do episode about one of my favorite stories: Zanzic, Charlatan Supreme!

According to an article in a magicians’ trade magazine by Harry Houdini, a man known as “Zanzic” came to Chicago during the World’s Fair and set up a whole house to be the ultimate “Spiritualistic Studio.” It had trap doors, hidden chambers, secret rooms…everything you need to put on a QUALITY fake seance. 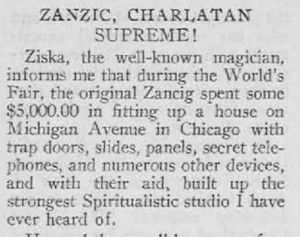 Was the story true?

If so, where was this awesome house?

Could it still be standing?

And did Zanzic and his crew nearly pull off the ULTIMATE fake seance experience for a man who wanted a conjugal visit with his late wife – with deadly results?

Listen in above, or: