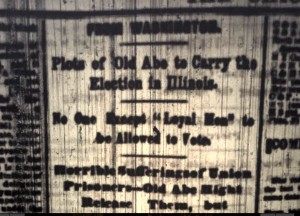 The Democratic National Convention of 1864 was by most accounts a disaster. Meeting in Chicago to nominate General McClellan to oppose Lincoln,  the party struggled with an unhealed rift between delegats who wanted to crush the Confederacy in one big blow and those who wanted to quit fighting and just let the South go. The Tribune’s coverage made the convention look like a regular amateur hour.

But one man was more impressed: Wilbur F. Storey, arch-conservative editor of the Lincoln-hating Chicago Times. A year before, when he described Lincoln’s speech at Gettysburg as “silly, flat and dishwatery utterances,” he was being relatively subdued in his criticism. Months before, he had said that “history does not acquaint us with so deplorable a failure as this administration,” and held up the coming Emancipation Proclamation as proof of what he’d said all along: that Lincoln was coming to take people’s slaves. This was no war to preserve the union, he said, but a contest to free  “the debased and irredeemably barbarous negro.” (1) The proclamation itself, he said “Will be known in all history as the most wicked, atrocious and revolting deed recorded in the annals of civilization.”(2) (That the war was something to do with states’ rights would not become a conservative talking point for decades).

Even this was not Storey at his worst. Though far more loquacious than most modern cable news loudmouths, some of his racial ramblings would fit in fine among alt-right commenters on youtube. In 1862 he complained that rather than caring about the rights of white men, congress had “n—r on the brain, n—r in the bowels, n—r in the eyes, n—r, n—r everywhere….all powers have found their superior in the great n—r power that moves the huge, unwieldy, reeking and stewing mess of rottenness which makes up this administration and its party.” (3) Though it’s common now for detractors to claim that Lincoln didn’t do enough for the slaves, or that he was really just as big of a racist as any slave-holder, Storey’s rants (and his paper’s popularity) can be useful in showing just what Lincoln was up against.

Naturally, Storey supported McClellan in 1864, and covered the Democrat Convention as though it was the Second Coming (it’s useful to note that the parties of 1864 were very different; Storey referred to his party as both “The democrats” and “conservatives,” while referring to republicans as “the abolitionist party.”)

Its in his election coverage that Storey’s rants and language seem most strikingly modern in 2016. Months before the convention, he’d suggested that Lincoln was going to rig the election and refuse to allow conservatives to vote. In an August 31, 1864 editorial, “Plots of Old Abe,” he doubled down on the claim. “The machinery for carrying out the… plot is in readiness,” he wrote. “It will certainly be applied unless, in the interim, the people of Illinois assume such an attitude as will convince the tyrant that there is one step that he cannot with safety take. Let it be understood that… any attempt on the part of the despot to do otherwise (than conduct a fair election) will surely lead to bloodshed, and, perhaps, even at the last moment, the attempt to coerce Illinois may be abandoned.” (5)

Throughout the autumn, as the fall of Atlanta made Lincoln’s re-election seem assured to most observers, Storey continued to claim that McClellan’s victory was certain, seizing on any rumor of fraud in Lincoln’s favor while angrily brushing off any rumors of fraud going the other way. He saw “evidence” of the conspiracy everywhere, from reports that a local judge was seen voting in Indiana (he had his residence there) to seeing people who looked like confederates coming to town and attempting to hold a meeting with Perkins Bass, a man pinpointed by Storey as one of the major players in Lincoln’s plot. His front pages reprinted  speeches from far-flung corners about the reasons that even if Lincoln won, his inauguration should be resisted, perhaps by force.

There was, in fact, a plot to disrupt the election in Chicago, but not in the way Storey imagined. Later known as the Northwest Conspiracy,  Confederate operatives and supporters were sneaking into the city throughout October, plotting to liberate the southern prisoners of war held in Camp Douglas, arm them, and take over the city the night before the election. Though it’s highly unlikely that the starving, sickly prisoners could have been victorious, later reminisces of those involved make it clear that the conspiracy was at least real plot. Word of it leaked to General B.J. Sweet, who ordered in reinforcements and arrested several of the plotters before it could be brought into action. 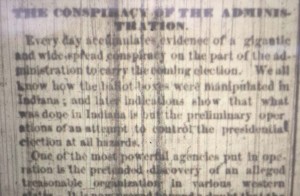 Though most Chicago papers spoke breathlessly of how narrowly the city had escaped destruction, Storey reacted just the way a modern spin doctor would: claiming that the conspiracy was a false flag. “Every day accumulates evidence of a gigantic and widespread conspiracy on the part of the administration to… control the presidential election at all hazards,” he railed. “If they abolitionists did not actually bring these men here, they conceived the idea of permitting them to come, and of charging their coming upon the democratic party! The alarm and terror, then, into which the city has been thrown is chargeable directly upon the republican party… the value of such revelations today every voter will understand. They will be part and parcel of the grand abolitionist plot to carry the election by force and fraud.” (6) He warned that “vigilance committees” should be set up at the ballots in every ward – “especially republican wards.”

Lincoln, though, won the election with 55% of the popular vote, and a landslide in the electoral college. Storey acknowledged the defeat, but didn’t entirely accept it, and continued to insist that it must have been rigged. “Messrs abolitionists,” he wrote, “you have won the election. We shall not now inquire by what agencies. A few days will reveal them, and disclose also the appropriate action to be taken by your opponents in relation thereto.” (7)

He didn’t say “I’ll keep you in suspense,” but he came awfully close. 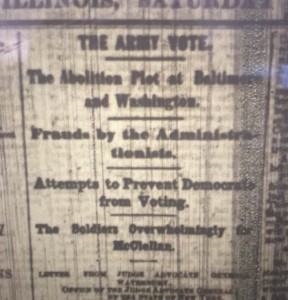 Seven years later, Storey was one of the prime pushers of the tale that Mrs. O’Leary, whom he called an “Irish hag,” had started the Great Chicago Fire (he wasn’t wild about the Irish, either). But though his impact on Chicago history, and his influence on Victorian politics, were vast, he’s mostly forgotten today. Though his large headstone is near the entrance, no one in the Rosehill cemetery office knew who he was when I first asked about him while putting together my tour route there.

Perhaps it would be better if I just let his rambles and raves stay in the trash bin of history, locked up in microfilm reels held in just a few libraries. But I just can’t resist giving people the chance to stomp on the old jerk’s grave.

A chapter on Storey’s strange marble mansion, his descent into (further) madness, and the battle over his bizarre will is featured in the new Mysterious Chicago book.