By all accounts, “Roosevelt” spends much of the film shaking hands, smiling, and saying “dee-lighted.” And everyone did a lot of frantic waving around.

Between shots, the actor would take out the false teeth and remark that they were a pain to wear. “It must be fierce to have ’em growing on you,” he said.

And the poor lion, for his part, spent most of his time hiding while the crew did their best to scare him into looking fierce for the three polyscope cameras.  The fist shot fired hit him in the jaw, and the lion let loose a might roar and proceeded to scare the living hell out of the crew by jumping for the platform where the cameramen were stationed. The platform was twelve feet above the ground, and it looked enough like he would make the jump that the camera men jumped down and ran like hell. But King Leo (the lion) hit the bars at about the eight foot mark and fell to the ground. The cameramen re-took their positions and filmed “Roosevelt” firing the shot that brought the lion down.

Obviously, no title card would be claiming that no animals were hurt in the making of this motion picture.

The film ended with everyone doing a war dance around the poor lion’s remains, while Roosevelt grinned, shook hands, and said “dee-lighted.”

The lion had cost $300. The film made the company around $15,000.  It’s tempting to call it the first mockumentary, but it wasn’t by a long shot – both Selig and Spoor had filmed Spanish American war footage in the outer suburbs a decade before.

Meanwhile, filmmaker Cherry Kearton did film actual footage of the Roosevelt safari, but it wasn’t nearly as popular as Selig’s film. His footage of the party crossing a river just wasn’t as exciting as a lion hunt, real or otherwise.

Here’s a newspaper shot of a scene being filmed inside of the studio “greenhouse” (see the podcast page for pictures of how the building looked then – and how it looks now!) In the background you can see the top of another buidling, indicating this is about on the third story of 3900 N. Claremont. 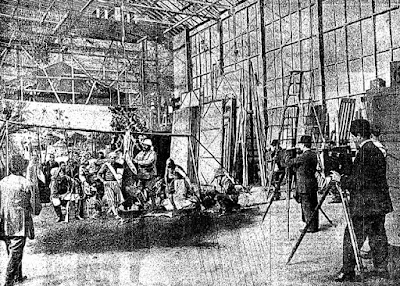 The actors with the unfortunate lion. The guy playing Roosevelt doesn’t look too accurate to me, but people in those days wouldn’t have been accustomed to seeing actual film footage of him: 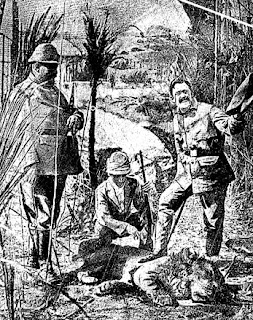 And here’s some actual Selig footage of Roosevelt from the World’s Fair in 1903. Selig had made his name making such “actualities.”