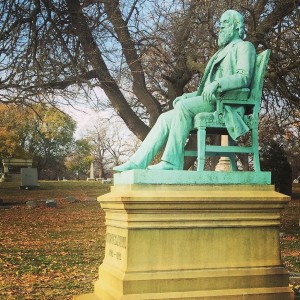 While I was the University of Chicago library today, I ran across an 1867 book (pamphlet) really that I’d never even heard of Sketch of the Life of Charles J. Hull.  I knew about Charles Hull, of course – the house he built in 1856 is a landmark of Chicago history for the work Jane Addams did there, and a regular stop on ghost tours. I’d his read Charles’ own book, Reflections from a Busy Life, a few years ago at the Newberry Library, and found it fascinating. Charles was a guy who owned a tavern when he was 12, and tore it down at 15. He found his way to Chicago, worked his way through both medical and law school, and became a real estate dealer, activist, and something along the lines of a motivational speaker.

Now, a lot of nonsense is told about Hull House, the house he built in 1856 at Halsted and Polk. Though there were already rumors that it was haunted when social work pioneer (and future Nobel laureate) Jane Addams moved in in 1889, there’s no evidence that the land was built on an Indian burial ground, that Addams had a well of aborted fetuses on the grounds, or that the devil baby was a real, supernatural creature that Addams buried alive  (and geez, it’s not so bad when people exaggerate, say, the crimes of H.H. Holmes, but when people talk crap about Jane Addams, that’s pretty low. These stories drive the people who work at the museum up the wall).  And for the stories that Potawatomie Indians did a ghost dance there in 1812 to curse the white man…I don’t even know where to begin saying what’s wrong with that.

And we don’t even NEED those stories to explain any ghost sightings there. We know that the place was a home for the elderly run by nuns in the 1870s. We know that Mrs. Mellicent Hull died there in 1860, and that her son Charley died there in 1866.  And when Addams moved in, there was an undertaking parlor next door. Charles himself was a spiritualist, at least on some level, so it’s not impossible that he held seances there.

Though I’m no longer employed by a ghost tour company, I still feel that ghost enthusiasts deserve better than what they’re getting. All of these made-up stories, discouragement from checking sources and encouragement to jump right to supernatural explanations for things don’t help anyone, they just muddy the waters and jerk people around.

Anyway, from the new volume, I can clear up a little more: though previous sources didn’t say how Mrs. Hull died (Charles only said she died peacefully), Sketch of the Life specifies that she died of consumption (which we now call tuberculosis).  Charley died of cholera at the age of 19, after a very short illness.

Sketch also notes something I hadn’t heard, but wasn’t surprised at: Charles Hull was particularly incensed by the fugitive slave law of 1860, and there after helped “many a wandering stranger” who was escaping to freedom in Canada. It’s just one line, but it raises a strong possibility that Hull House was, at times, a sort of informal stop on the Underground Railroad!

My new company, Mysterious Chicago Tours, is not a ghost tour company, per se, but I’m still available to run ghost tours for private groups and schools. In the Spring, we’ll add historical cemetery walks, some of which feature the Hull plot pictured above. Get on our mailing list for dates!