Kiersten, a tour passenger on Friday night, snapped this cool shot – it was the hit of the tour when shown off on the bus! While I’m generally inclined to think of these “stairs” shots as reflections and smears (reflected ears are a common culprit), this is a really nifty one appearing to show two vaguely humanesque forms. I’ve adjusted it just a tiny bit to make it more visible: 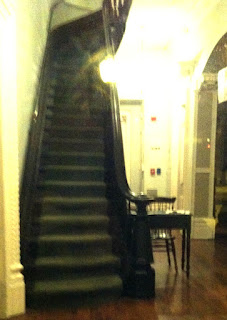 Cool! As I always say, there’s no such thing as good ghost evidence, only cool ghost evidence. But sometimes I don’t even care about the fact that there’s probably a more “rational” explanation, because the photo is cool enough on its own terms, even if it IS just an optical illusion.
As far as “women on the stairs” at Hull House go, there was a woman on the tour recently who told me she was a clairvoyant, and that there was a ghostly woman who came to the stairs to say hello to me every night. I always take these things with a grain (if not a whole shaker) of salt, but stories about a woman haunting the place go back well over a century; Millicent Hull died there around 1860, and a number of other women quite likely did during the 1870s, when it served as a home for the elderly run by the Little Sisters of the Poor.
While we’re on the subject of recent Hull House shots, a number were taken like this recently: 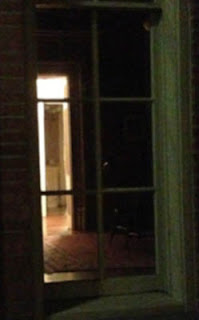 On phone screens, in particular, it can look like a feminine form in the window. Having seen a few lately, I took this one myself in attempt to reproduce the effect, and confirmed that it was just the fireplace. A picture frame on the mantel forms the “head.”
Elsewhere in town, we’ve had a number of nifty shots at the “alley of death and mutilation” behind the site of the Iroquois theatre.  There was one woman on my tour on Saturday who said that she felt like a hand was touching her face in the alley, and in one picture of her, it does look as though there’s a handprint on her face. This calls to mind all SORTS of folklore motifs, like the story of the “banshee’s hand” leaving permanent marks on people’s faces, or stories of handprints never fading away, which show up all over the world, including Chicago’s Frank Leavey story.

Now, one thing worth noting is that sometimes it’s been said that women or are pregnant or new mothers feel as though a kid is holding their hand in the alley. If the woman in question now finds out she’s expecting, that’ll be one heck of a story!