Long gone and nearly forgotten, in 1894 a high bridge – 42 feet above the water – was erected as a sight-seeing bridge over the lagoon that runs along Lake shore Drive. On a clear day, you could see the stockyards and Jackson park from the bridge. It attracted plenty of weirdos – one elderly woman was known to go there daily to get as drunk as humanly possible. Another man would often go to whistle at the moon in a strange, eerie tone that scared the crap out of the cops. But it became most famous as a place to commit suicide. By 1900, kids around Chicago were superstitious about it, telling friends to “stay away from suicide bridge.”

No one knows how many people ended their lives with a leap from the bridge before it was closed in 1919, but it was probably between 50 and 100 (the number who came intending the jump, but didn’t (or survived) was estimated as being in the hundreds). It was so popular a destination for suicide that even people NOT seeking to die by drowning came to the bridge – one man hanged himself from the edge, and another went there to shoot himself.

Newspapers came up with wild headlines about it, including:
– Policeman Spoils a Suicide: Interferes When Fascinated Crowd in Lincoln Park is Waiting for Man to Kill Self
– Doom High Suicide Bridge: Lincoln Park Commissioners to Spoil Convenience for Those Contemplating Self-Destruction (note: this was in 1909, and nothing appears to have come of it. When it was closed a decade later, it was due to poor condition).
– Jumps from Bridge To Lagoon: Says he Tried Suicide for Fun

So renowned was the bridge that it was even named “suicide bridge’ on postcards: 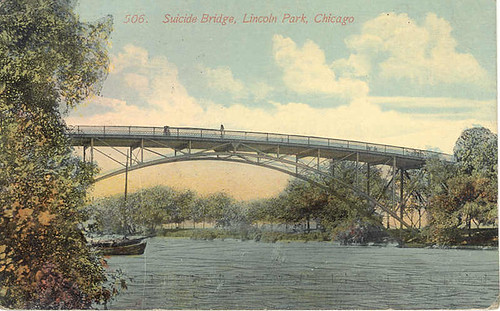 Coming tomorrow: the strange story of the film of a man jumping from the bridge!

Notes:
1. Thanks to Jason W for the tip.
2. No, we didn’t photoshop that first picture to make it more “ghostly.” That’s the way the shot appears in the Daily New image archives. Pretty creepy lookin, though, isn’t it?

One thought on “Suicide Bridge in Lincoln Park”