When they caught Johann Hoch in New York, where he had fled from Chicago, he had already proposed to what would have been something like his 45th wife. His habit was to marry women and take their money within about a week or meeting them.He was not an attractive guy, but he was charming as all get out. “All of der vimen for Johann go crazy,” he explained, merrily, as his trial went underway in 1905. In fact, he preyed on lonely spinsters. Here are a few of his wives – not a rosy cheek among ’em. 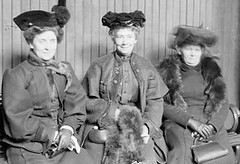 But he didn’t just steal from his wives. About a third of the time, he killed them, too.

One of the more interesting aspects of the story is that the police initially claimed that he was a protege of H.H. Holmes of the Murder Castle. The press made this sort of claim all the time; playing “connect the dots” with killers sold papers. But in this case, the police and press both reported that Hoch had been a regular at the murder castle under the name Jacob Scmidt (or Edward Hatch, depending on you asked). One by one, several of the major players in the Murder Castle story from a decade before were marched into the jail to identify him. Only E.C. Davis, the jeweler who never seemed to play along with this sort of thing, said he didn’t recognize Hoch. However, all of these reporters were almost certainly mistaken; Hoch wasn’t even in the country yet when Holmes was operating the murder castle. This is one of the things we have to consider when we try to separate fact and fiction when it comes to Holmes – much of what we know comes from stories told by gossipping neighbors, and we have to wonder just how much of it they were making up.

2 thoughts on “Tales of the Gallows: Johann Hoch”